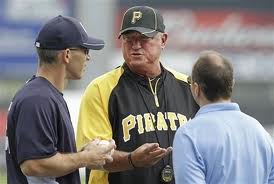 Owner Bob Nutting a huge supporter of Pirates manager Clint Hurdle, is prepared to open preliminary contract talks with Hurdle on a one year extension before the regular season, a source with direct knowledge of the situation told Inside Pittsburgh Sports on Wednesday night.
Hurdle is entering the final year of his contract and despite two straight collapses, Nutting strongly believes in Hurdle being the right manager for this team.
Meanwhile, according to the individual, the job security of front office types Kyle Stark, assistant GM, and head scout Greg Smith are not very secure going into the season and one or both of them could be the ones to take the fall for a slow start, but cleaning house in the front office would not happen until after the draft at the earliest, team sources have said.
Nutting was very close to firing Smith this off-season.
GM Neal Huntington has been given a vote of confidence from Nutting this off-season, a source says, but pressure is mounting on Huntington who is signed through the 2014 season.
Signing Hurdle to an extension and then Nutting firing Huntington later this season would be problematic as any new GM would want to bring his own manager in but that doesn’t appear to be a concern for Nutting.
What helps Huntington’s job security is Frank Coonelly being very close with Nutting. Were Nutting to fire Huntington, it will certainly force Coonelly from no longer having the power he has on personnel moves now as no new GM would agreed to the type of authority Coonelly has. In reality, Connelly is the GM of this team. Connelly would likely move into more of a business role were there to be a significant shakeup in the front office at somepoint in the next year.