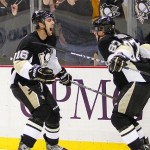 LATEST ON NEGOTIATIONS BETWEEN PENGUINS AND BRANDON SUTTER
Brandon Sutter is playing the best hockey of his Penguins career and just at the right time as negotiations between the Penguins and Sutter’s reps at Newport Sports are expected to heat up in the coming weeks, according to sources close to the situation.
The Penguins as anticipated months ago, have made Sutter a top priority to lock up to a long-term extension. Sutter, 24, is a restricted free agent at seasons end and could be an unrestricted free agent in July 2015, making him an interesting situation with the cap projected be around $75 million in 2014-2015. Sutter just 24 is already playing in his sixth NHL season.
The battle for the Penguins will be to keep the cap hit below $4 million.
Sources say the Sutter camp eyes a Tyler Bozak type deal (5 years, $21 million) and his camp will be seeking a deal is in excess of $4 million per season.
Pittsburgh is open to a four to six year deal I’m told. It would be pretty messed up to see Sutter make more than Chris Kunitz wouldn’t it? Sutter is making $2.7 million this season.
The Penguins next season have around $54.5 million committed to 13 players. The salary cap will be $71 million. Key UFA’s include Brooks Orpik, Matt Niskanen, Jussi Jokinen, Joe Vitale, Deryk Engelland, Jeff Zatkoff. Notable RFA’s who need new deals include Sutter and Simon Despres.
COMMITTED SALARIES FOR 2014-2015
FORWARDS
Evgeni Malkin – $9.5 million
Sidney Crosby – $8.7 million
James Neal – $5 million
Chris Kunitz – $3.85 million
Pascal Dupuis – $3.75 million
Beau Bennett – $900,000
Craig Adams – $700,000
DEFENSEMEN
Kris Letang – $7.25 million
Paul Martin – $5 million
Rob Scuderi – $3.335 million
Olli Maatta – $894,167
Robert Bortuzzo – $600,000
GOALTENDERS
Marc Andre Fleury – $5 million