Steelers 2010 free agents buzz: Hampton will hold out if franchised? 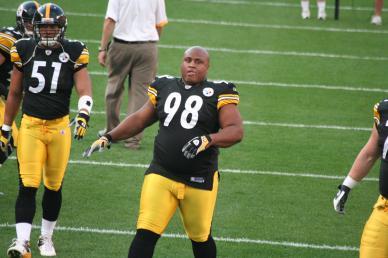 DT Casey Hampton
HEIGHT/WEIGHT: 6’1′ / 325
DOB: 9/3/1977
AGE: 32
COLLEGE: Texas
CONTRACT STATUS: 8/22/2005: Signed a five-year, $22.75 million contract. Free Agent: 2010.
2009 Stats: 43 TOT – 23 Solo – 20 assists – 2.5 sacks
Latest Buzz: The 32 year old defensive tackle had his best statistical season of his career, setting career highs in tackles.
Was not offered a contract by the Steelers prior to the 2009 season.
Due to the potential of an uncapped year and coming off of a pro bowl season, Hampton will get his last big pay day of his career.
One avenue the Steelers won’t likely explore is franchising Hampton. Representatives for Hampton have already made it known that the pro bowl DT will hold out if the Steelers franchise Hampton.
Out of respect for Hampton the Steelers will only franchise Hampton if they are confident they can strike a long-term deal that works for both sides.
Meanwhile, the Steelers will re,ach out to Hampton’s representatives in the next 3-4 weeks and make an offer. Hampton has indicated he wants to return but will not give the Steelers a home-town discount.
If Hampton makes it to free agency, Pittsburgh will monitor his situation closely.
Hampton is believed to be open to returning to his hometown of Texas and playing for the Houston Texans. That talk has been going around since training camp.
Will Hampton return?—-50/50—-

RB Willie Parker
HEIGHT/WEIGHT: 5’10’ / 209
DOB: 11/11/1980
AGE: 29
COLLEGE: North Carolina
CONTRACT STATUS: 8/30/2006: Signed a four-year, $13.6 million contract. Free Agent 2010.
Latest Buzz: Willie Parkers’ run as an elite running back has come to an end as the two-time pro bowler was cemented to the bench this season due to the emergence of 22 year old running back Rashard Mendenhall.
Parker had another injury filled season in 2009 and lost his starting job after week 3. Parker rushed for 398 yards in 09 but went out with a bang rushing for 91 yards on 12 carries in the Steelers season finale.
The 29 year old running back made $4 million in 09 and will actively seek an opportunity to start elsewhere.
“I’m a starter and I’ve always looked at myself as a starter, ” Willie Parker said following Sunday’s regular season finale.
Houston, Green Bay, Tampa Bay, Seattle are among a few potential landing spots for Parker, however, he will not be in high command.
Will Parker return?—-Won’t be back—-

Kicker Jeff Reed
HEIGHT/WEIGHT: 5’11’ / 225
DOB: 4/9/1979
AGE: 30
COLLEGE: North Carolina
CONTRACT STATUS: 3/8/2005: Signed a five-year, $7.5 million contract. Free Agent in 2010.
Latest Buzz: Declined a multi-year extension from the Steelers that would have paid him $1.75 million per season. Is seeking upwards of $2.5 million per season.
Made a 27 of 31 field goals and 18 of his final 19 field goals.
Citied on two occasions for off-field problems with the latest being arrested for public intoxication and resisting arrest in October.
Still one of the most reliable kickers in the game but statistically was the worst kicker in the league on kick-offs.
Reed is believed to be keen on testing free agent. Steelers could franchise Reed and then try to workout an extension.
Team is torn on this point regarding what direction they will go.
Will Reed return?—-Too early to call —–
Safety Ryan Clark
HEIGHT/WEIGHT: 5’11’ / 205
DOB: 10/12/1979
AGE: 30
COLLEGE: LSU
CONTRACT STATUS: 3/14/2006: Signed a four-year, $7 million contract. Free agent in 2010.
Latest Buzz: In a contract year, safety Ryan Clark, 30, was a major disappointment. With Troy Polamalu missing 11 games due to injuries, Clark struggled mightily in pass defense.
Clark had 89 tackles and 3 interceptions on the season but despite his struggles, a return to Pittsburgh is not out of the question.
Clark talked extensively on Sunday that he wants to return. However, sources indicate for Clark to return, he will have to sign on the Steelers terms and at their price.
Pittsburgh is open to another contract under $2 million per season and the team is expected to offer Clark an opportunity to return but again on their terms.
The Steelers don’t have depth at the safety position with Tyrone Carter’s best days behind him and Ryan Mundy clearly showing he’s not a starter in this league.
Will Clark Return? —- Too early to call —-