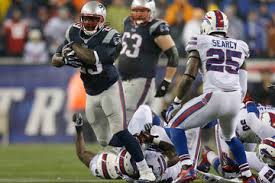 BLOUNT TO SIGN WITH STEELERS
The Pittsburgh have found a No. 2 running back behind Le’Veon Bell, agreeing to a two year deal with running back LeGarrette Blount. The deal was first reported by Aaron Wilson of the Baltimore Sun.
Blount a hard nosed runner, rushed for 772 yards and scored seven touchdowns last season for New England, averaging 5 yards per carry. He rushed for 172 yards on 29 attempts in the post-season, including a 166 yard performance against Indianapolis in the Division Round.
In four NFL seasons, Blount has averaged 4.7 yards per carry, rushing for 2,711 yards and 20 touchdowns.