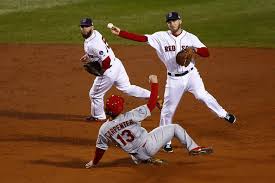 DREW RESIGNS WITH RED SOX
Shortstop Stephen Drew who the Pirates looked into early in free agency several months ago, resigned with the Boston Red Sox today on a 1 year deal worth $10 million.
Drew declined a $14.1 million qualifying offer from the Red Sox this winter leading to him going unsigned into the season due to no teams willing to give up draft compensation for him.
The Pirates with a major shortstop problem, had discussed Drew recently again as a potential target to sign after the draft.