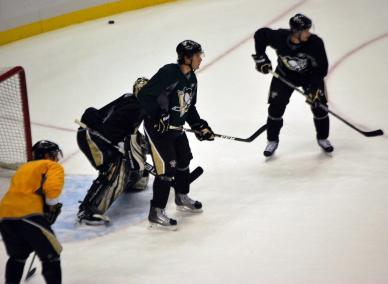 Locker Room Talking Points
Today’s feature of Locker Room Talking Points is with forward Eric Tangradi who I caught up with after the morning skate.
Eric told me that he’s feeling pretty good about his game but is anxious about getting that first goal of his career. This weekend could be it as the Penguins host the New York Islanders on Friday night and travel to Philadelphia on Saturday where Tangradi will face his home-town team.
Tangradi also touched base on some areas he needs to improve and showing more poise in the offensive zone.
Tangradi on his play so far:
“I think I’ve done a pretty good job. I definitely fell like there’s some areas I need to work on as well. I’m getting to the net, getting shots, being a presence in front but still haven’t got that first one and that’s something I’d like to get that under my belt.”
Areas he needs to improve: “I think in the D-zone. Along the wall, just gotta do a better job of getting out of the zone off the wall and make better decisions.”
On feeling urgency to rush the puck in offensive zone: “I think so, maybe a little bit. There’s really no excuse for that anymore. That’s stuff should be out of my game in the preseason but you know i think every game I’m starting to get more confident, starting to move the puck and have a little more poise in my game.