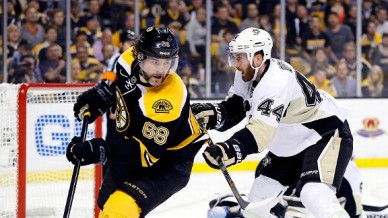 LONG TERM PICTURE: WHAT SHOULD PENS DO WITH BROOKS ORPIK?
Since the Rob Scuderi signing, I’ve been getting some emails from fans that the Penguins should trade Brooks Orpik. My answer to all them has been “no chance”. Maybe I’ll look bad and Penguins GM Ray Shero pulls off a summer surprise and trades Orpik but I just don’t see it happening.
The Penguins strongly feel you need four legitimate top-4 defensemen to win a Stanley Cup and the addition of Scuderi gives the Penguins a strong group of top two pairings in Paul Martin – Brooks Oprik, and Rob Scuderi – Kris Letang. Trading Orpik would diminish the Scuderi signing as the Penguins would be right back to where they were last season; With three top-4 defensemen, this time being Martin, Letang and Scuderi.
Orpik, 32, is entering the final year of his contract and turns 33 in September. He carries a $3.75 million cap hit.
While Orpik has clearly lost a few steps the last couple seasons, he’s still a No. 2 pairing type defenseman who plays big minutes and is a strong penalty killer. Not to mention he’s the pulse of that team inside the room. Orpik adjusted his game last season, becoming less aggressive and more of a stay at home defenseman, ranking 9th in the NHL with 114 blocked shots. Orpik, though, still brought a physical style to the table, just picked his spots better, ranking 11th in the NHL among defensemen in hits with 119.
Playing a bit more conservative could go a long way towards Orpik playing another two to three years at a high level as he has played a punishing style for his entire career.
While it’s very unlikely to see Orpik moved this summer to clear cap space, whether the Penguins should commit to Orpik on a new contract is dicey.
We explore three options for the Penguins with arguments for each:
Option 1: Extend Orpik this summer/during season | Argument: Finding top-4 defensemen via trade or free agency is expensive and while I’m told Orpik feels he took a hometown discount in the summer of 2008, he would likely do so again and accept a salary in the range of what he’s making now. When looking at the big picture, the Penguins are a win-now team and top prospects in the system like Olli Maatta, Derrick Pouliot and Scott Harrington are years away from being legitimate top-4 NHL defensemen. Penguins GM Ray Shero has adjusted to the current market of dishing out three to four year contracts to players entering their mid-30’s as he’s more concerned about what those players will give him the next 1-2 years than year four. “If I’m going to pass on Rob Scuderi because I’m going to be worried about what he’s going to be like at 38, I’m not going to get him,” Shero said Friday of the Penguins signing the 34 year old Scuderi to a four year contract.
Option 2: Let Orpik play the season out then decide to try to sign him or not | : Argument: Orpik 33 in September has played a punishing style taking a lot of wear and tear, and while he might be 32 years old, his body might feel around 35, 36 years old in NHL years.
Orpik has dealt with abdomen issues and he’s played such a punishing style that the Penguins need to be cautious here. The Penguins rolled the dice with Pascal Dupuis letting him play out his one year contract and there’s a good argument to make that the Penguins should do the same with Orpik.
Option 3: Trade Orpik | Argument: Even with early projections of the salary cap being $68-$70 million in 2014-2015, the Penguins have $53,025,000 committed to just 11 players for next season. Signing Orpik to a deal in the $3.5 – $3.75 million range and needing to sign Brandon Sutter, an RFA next summer, would certainly have the Penguins committing around $60 million to just 13 players. Trading Orpik this summer with one year left on his deal would have the Penguins selling high as there would be tremendous interest in Orpik from teams like the Toronto Maple Leafs.
———————————————————————-
My Take on what the Penguins Should Do: Option 2