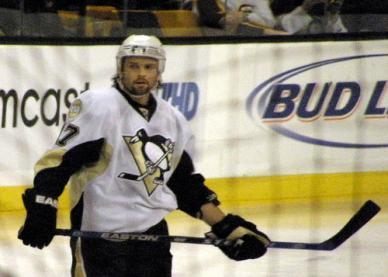 Despite a 10-1-2 stretch, the Penguins are still not a lock to the make the playoffs as they‚Äôre only five points ahead of ninth place Florida. There is a lot of work that needs to be done between now and the end of the regular season.
Two players who desperately need to pick up their games are Petr Sykora and Ruslan Fedotenko. Sykora who is a streaky player has 3 goals in his last 17 games and only one goal in his last 9 games. At this time last year Sykora was playing his best hockey of the season. From 3-9-08 through 3-24-08 Sykora had 7 goals in 7 games for the Penguins. Sykora needs to return to that level for the Penguins final eight games.
Winger Ruslan Fedotenko has been a complete disappointment down the stretch going scoreless in his last 14 games. Fedotenko only has two goals in his last 20 games. The Penguins knew when they signed Fedotenko that he was a borderline top 6 forward but he has had minimal impact winning battles in the corners and being a presence in the front of the net, which is an area they thought he would be an asset in.
Lately, many of Fedotenko’s shots are coming from the outside and with Petr Sykora being the primary perimeter player on the 2nd line, Fedotenko has to be the player that drives to the net and wins battles in the corners. He is not doing that with consistency and that is the primary reason he has gone scoreless in 14 games. While Miroslav Satan (17 goals) get‚Äôs brought up as a complete bust
you can make an argument for Fedotenko who signed a one year deal worth $2.2 million. The organization is highly disappointed with the impact he has had and it‚Äôs not all about stats as the team only viewed him as an 18-20 goal scorer. He currently has 13 goals and missed four weeks in January with a broken wrist
The Latest Rumblings
The Penguins official offer to Petr Sykora prior to the trade deadline was 2 years worth $6.1 million.
The Penguins have an interest in re-signing Fox Chapel native Bill Thomas as the organization see‚Äôs him as a depth player they would like to keep around but a source close to Thomas tells me that Thomas does not see eye to eye with Dan Bylsma which could lead to Thomas seeking employment elsewhere if Blysma is retained.
The Penguins are going to watch Philippe Boucher’s performance in practice on Tuesday very closely. The team is considering putting him in the lineup against the Flames on Wednesday.
A winger that would have drawn significant interest from the Penguins will not be on the free agent market as Martin Havlat and the Hawks will finalize a three year contract before July 1.
It’s a foregone conclusion that the Lightning will move Vincent Lecavalier at the draft. Marty St. Louis has become the leader in the locker room and the team believes it will receive a significant offer at the draft for Lecavalier. Lecavalier has been dropped to the second line with the emergence of Steven Stamkos.
Tyler Kennedy and Rangers forward Ryan Callahan are clones of each other. Callahan reminds me of Kennedy everytime I see him play. Both great energy players who have 20 goal potential.
The Dallas Stars made an offer for Ryan Whitney that the Penguins were believed to be seriously considering according to a source in Dallas. It would have landed the Penguins James Neal and a top prospect
Photo courtesy of Dan4th