The Marty St. Louis to the New York Rangers chatter is only heating up 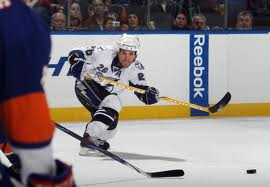 ST LOUIS A GOOD BET TO BE TRADED BY THE SUMMER?
The Marty St. Louis to the New York Rangers chatter is only heating up. St. Louis demanded a trade prior to the Olympics and the buzz around the league is that St. Louis stance has not changed one bit despite being added to Team Canada.
One NHL source said St. Louis is a man of his word and won’t change his mind.
St. Louis had every opportunity to kill the trade speculation today when he met with reporters and he didn’t.
“The only thing I can say about that is I’ve had conversations with Steve on my future here,” St. Louis said, via the Tampa Times “Out of respect for my teammates I think that’s all I’m going to say about that. I’m not going to get into answering this question every day. I’ve had conversations with Steve about my future here. Those conversations are between me and Steve.”
Whether it’s before the trade deadline or this summer, the talk won’t go away that St. Louis is determined to force a trade to the Rangers and end his career in New York.
Darren Dreger reports that the Lightning are telling teams that St. Louis is “locked on” the Rangers.