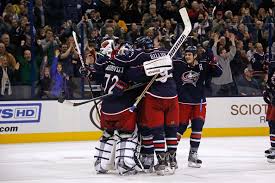 The NHL playoffs is all about matchups and from a matchup standpoint, things could not have played out better for Pittsburgh in avoiding Detroit and Philadelphia in Round 1. Despite many being down on the Penguins Stanley Cup chances, the Penguins are heavy favorites in their first round series vs Columbus. The Blue Jackets, though, have the ingredients of making this a more difficult series than many expect.
Here are three keys to the Blue Jackets pulling an upset/or making this a long series:
1. Sergei Bobrovsky – The reigning Vezina Trophy Winner has regained his 2013 form in the second half of this season and that could be bad news for the Penguins. Bobrobvsky is the key to a Blue Jackets upset over Pittsburgh and a key for Columbus will be Bobrovsky setting the tone from the start of the series. He is surely going to have to steal a game very early in this series as the Blue Jackets will need a split in Pittsburgh to have a shot. Fall down 2-0 to Pittsburgh, it’s game over.
Bobrobsky Since January
January | 8-2-0, 2.31 GAA, .926 save percentage
February | 2-2-1, 2.42 GAA, .931 save percentage
March | 7-4-1, 2.15 GAA, .928 save percentage
April | 5-1-1, 1.82 GAA, .945 save percentage
Over his last 20 games, Bobrovsky has posted a .935 save percentage. He will need to stay in that neighborhood.
2. Blue Jackets must follow blueprint of Flyers – The Penguins were 5-0 vs Columbus in the regular season and led for 299 minutes and 4 seconds during the five games, with Columbus leading for just 56 seconds. Columbus played the Penguins tight in a handful of those games, but they came off at times as showing the Penguins too much respect and being in awe of them at times.
“They {Columbus} can’t show Pittsburgh once ounce of respect,” an NHL scout said of the Blue Jackets. “It starts mentally before Game 1. They have to believe they can beat Pittsburgh and be in their face at all times……grind out wins. If they sit back, play passive, it {the series} won’t get past five games.”
The book on the Penguins from coaches and players is that the Penguins stars don’t like to be hit. “Pittsburgh is fragile,” a former Penguin said of Pittsburgh. “You can lure them into the extra curricular stuff by just poking them in the back of the leg….. The Neal’s, the Malkin’s, they don’t like to be hit,” the player said.
The word out of the Blue Jackets locker room is that they’ve taken notice of what the Flyers have done to the Penguins. “The Flyers are in their face and in their space all the time,” Mark Letestu said via the Columbus-Dispatch “They frustrate them into bad penalties, then go score on the power play. It seems like that’s the way to beat them.”
3. Win Special Teams Game – Wanting to follow the Flyers blueprint sounds good in print from Blue Jackets players but you have to be able to back it up by winning the special teams game over the Penguins.
If the Blue Jackets don’t win the special teams game, they have no chance of competing in this series.
The Penguins are not a great team at even strength and with no bottom-6 scoring, they project as a team that is going to live and die through their special teams when they meet a team that can shutdown their top-2 lines.
Pittsburgh was 13-14 on the penalty kill vs Columbus. That will need to change quickly for Columbus.
The daunting task for Columbus will be keeping the Penguins power play from winning games to a minimum.