Timmons unable to make it through Wednesday’s Practice 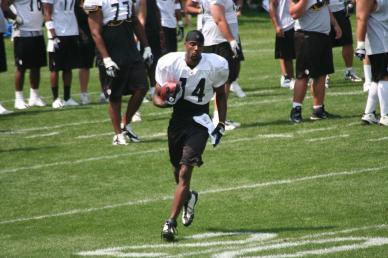 Pittsburgh Steelers starting inside linebacker Lawrence Timmons predicted on Monday that he would play on Sunday against the Chicago Bears.
Going into Wednesday’s practice that appeared to be the case, but mid-way through Wednesday’s practice Timmons re-injured his ankle and his status for Thursday’s practice is up in the air.
Timmons and Troy Polamalu were the only players on the injured report this week but 2nd year wide receiver Limas Sweed has joined them.
Sweed was also limited in practice on Wednesday with a foot injury.
In the Steelers season opener, Sweed fell behind rookie wide out Mike Wallace on the depth chart.
Timmons has not been ruled out for Sunday’s game and his status won’t be known until later in the week.
Troy Polamalu, Defensive end Aaron Smith, wide receiver Hines Ward and safety Tyrone Carter missed practice on Wednesday.
Bears TE Dezmond Clark out with cracked rib
The Chicago Bears have lost starting linebackers Brian Urlacher and Pisa Tinoisamoa for the season. The team will also be without tight end Dezmond Clark who missed practice on Wednesday and has been ruled out of Sunday’s game with a cracked rib.
Two Steelers inactives in opener to return to the lineup?
In practice today, cornerbacks Joe Burnett and Keiwan Ratliff worked with the Steelers 1st special teams unit, filling the role of being the primary gunners.
Both players were inactive in the season opener.
Bears kick returner Devin Hester is among the best returners in the NFL.
*Jeff Reed was named AFC Special Teams Player of the week.