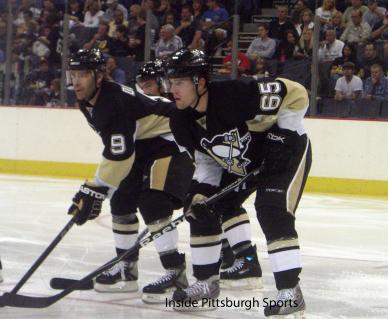 One trade to watch for on draft day could be between the Minnesota Wild and the Pittsburgh Penguins.
Wild GM Chuck Fletcher is believed to have his eye on Penguins defenseman Ben Lovejoy. Fletcher values Lovejoy as one of the Penguins top five prospects and believes he is NHL ready.
There is a 0% chance that Fletcher would make an offer sheet to Lovejoy but a swap of Pascal Dupuis/Ben Lovejoy for a high draft pick is a possibility, although the Wild don’t own a 2nd round pick (09) at this point.
Pittsburgh is currently in talks with Lovejoy about a two year deal.
Updated Penguins Free Agency Chart – New Info on Fedotenko,
Draft Buzz
As I mentioned last week, Pittsburgh’s interest in Frolunda’s Carl Klingberg has cooled as there are concerns that he is in no hurry to play in North America.
Despite injury concerns, Pittsburgh is very high on Zach Budish who could go anywhere between 20-30 but indications are that the Penguins are leaning towards winger
Kyle Palmieri of the U.S. Under 18 team, if he’s available at #30.
Members of the Penguins scouting staff met with Palmieri last week and the team loves his hockey sense and believe he has 30 goal potential as a winger.
Palmieri has committed to play for Notre Dame for the fall of 2009.
More Rumors
Don’t believe any talk that the St. Louis Blues are in on Dany Heatley. The Blues still have some financial troubles and can’t add a salary that large.
The Blackhawks are making a strong push for Heatley as are the Canucks and LA Kings. Columbus has backed off due to the Senators demands but they remain somewhat interested.
I’d say there is less than a one percent chance that the Sedin twins get the 12 year deal they are seeking.
Follow DePaoli on Twitter