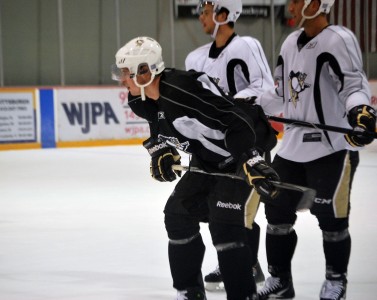 Sidney Crosby took his first step on Monday towards “possibly” working his way back for a return this season, most likely in the post-season.
The vibe out of Sidney Crosby’s camp is that from here on out, the intention is to get back this season as Crosby remains symptom free and has yet to suffer any setbacks at this early stage of his rehab process as the Penguins captain slowly increases his workouts.
Crosby is expected to resume skating throughout the week. Yesterday’s skate for Crosby was very light but a postitive development in his rehab process.
Indications are that if Crosby has no setbacks {always a big if} and is officially cleared in a 4-to-5 week period, all signs point to him leaning towards playing in the post-season and not opting to take precautionary measures and sit out the rest of the season.
From what’s being relayed to me, missing the rest of the season obviously remains a possibility for Crosby but not if Crosby gets cleared to play at somepoint next month.
Assuming things continue to move in the right direction, the best case scenarip is still considered a return in the 1st or 2nd round of the playoffs {mid April to early May}.
A healthy Crosby could alter the Eastern Conference playoff race as Pittsburgh would be right back into the mix as a Cup Contender.
Regarding a decision to play this season, several people are involved in the process, more so than the Penguins organization, most notably CAA Sports Agents/Reps Pat Brisson, James Nice and his father Troy Crosby.
Everything is day-to-day with Crosby but if cleared, the intention is to play this season, sources say.