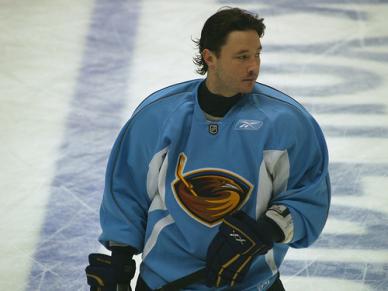 According to reports, Atlanta Thrashers forward Ilya Kovalchuk won’t have to wait until March 3rd to find out where he will be heading.
RDS.CA first reported this afternoon that Thrashers GM Don Waddell has informed Kovalchuk on Wednesday to expect a trade to another NHL team over the next few hours or days.
Bob McKenzie of TSN.Ca reports Boston Bruins, New Jersey Devils, New York Rangers, Philadelphia Flyers, Chicago Blackhawks and Los Angeles Kings are among the teams in the mix. The Vancouver Canucks have been mentioned off-and-on from other outlets.
Pittsburgh is not involved, let’s get that out of the way.
Opinions vary on Philadelphia, Boston or Chicago being actively being involved in the Kovalchuk sweepstakes. I’ve been told Chicago is not considered a serious suitor at this time.
Although, Los Angeles has been regarded as the favorite by many, their efforts have been on Ray Whitney of late.They are the wildcard in this.
The Rangers continue to be the most aggressive team and the New Jersey Devils have been lurking.
The Devils quietly made a major play for Marian Hossa two years ago at the deadline.
There is also word that a few “surprising teams” are lurking that no one is talking about. One of them is the Minnesota Wild I’m told, according to a Pens’ source. The other is believed to be the Nashville Predators.