X’s & O’s: No finish ability, poor play away from the puck with forward group continue to haunt the Penguins

The Pittsburgh Penguins can pat themselves on the back from Sunday’s 4-1 loss in that they generated 38 shots, were +9 in scoring chances during 5 vs 5 play and controlled 59% of their shot attempts ( 5 vs 5).

Yet, this game was more than just Jimmy Howard out-playing Matt Murray.

“It seems like the mistakes we made ended up in the back of our net,” Mike Sullivan said afterwards. “That’s just the way it’s going right now. We did a lot of really good things as well, I thought we had a lot of zone time. We had a significant amount of scoring chances. I thought we got inside more tonight than we have in the past handful of games. It stings when you lose, but I think we’ve got to make sure we keep our heads up and we keep getting more determined and making sure we try to learn from each experience and move on.”

1. No Finish Ability in bottom-6, lack of high danger chances

Despite all the zone time and being more effectively in getting inside as Mike Sullivan alluded, Pittsburgh was still minus-2 in high danger chances (7/9 during 5 vs 5 play) and minus-1 during all situations.

Not surprisingly, Pittsburgh has scored 1 even strength goal over that span.

Talk among scouts is that the Penguins are not hard enough to play against and teams are keeping them to the outside without much resistance.

And when their puck management is off the mark on zone-entries, they’re getting killed in transition the other way. That was on display in the Detroit, Carolina losses.

When it comes to the high-end talent on the team, it’s bound to happen that the group will start putting the puck in the net more efficiently and hopefully soon for their sake, but no finish ability most notably for the bottom-6 continues to haunt this group from winning games.

Minutes into last night’s game vs Detroit, Riley Sheahan makes a quick assertive play below the goal-line and sets Carl Hagelin up for a golden opportunity for the Penguins to strike first.

Hagelin fires the puck right into Jimmy Howard’s chest. Those are plays the Penguins bottom-6 are not finishing and it’s not just good goaltending their running into.

That’s type of scoring chance Hagelin hasn’t been scoring for two years now. Something has to give……..

2. Poor Transition Defense is starting with lackadaisical play away from the Puck

The Penguins are back-to-back Stanley Cup Champions because of how committed the Penguin forwards became in both post-season runs to their play away from the puck in the neutral zone to the d-zone. It was downright dominant at times and a major staple of what Mike Sullivan was able to do with the Penguins core, an area Dan Bylsma struggled with so much after Pittsburgh won in 09 that play a part in Pittsburgh never getting back to the Stanley Cup during the Bylsma era.

Yes, it’s the regular season and the Penguins are two-time defending Champs, but a sense of urgency to start winning with defense has to hit home before it’s too late.

Some shifts the forward group (and it’s not just one line) is just going through the motions and it’s killing this team and a big reason Pittsburgh is currently out of the playoffs at this point.

When you have someone like Frank Corrado in your lineup because of injuries, your forwards have to show more commitment to picking up the right players on the backcheck then they showed vs Detroit.

The Gustav Nyquist first period goal saw Nyquist make a quick inside move and beat Matt Murray with a great shot glove side.

The lead-up to the play, though, had the Penguins far too passive inside their blueline in how the Red Wings get a pressured zone entry down the boards and Pittsburgh is in good position with four guys back to create a 4-on-2 situation for them defensively.

However, None of the Penguins forwards (Phil Kessel/Patric Hornqvist) care to pick up Nyquist where he gets just enough time and space to create the goal, while Dylan Larkin goal was the Penguins shooting themselves in the foot with terrible transition defense and poor awareness away from the puck that continues to be a game-by-game thing.

What played out here is the Penguins turn the puck over in the neutral zone and even have two players bump into each other but they were still in good position where a breakaway from Larkin should have never happened. 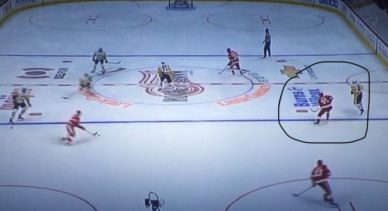 Phil Kessel has Larkin man-to-man and Kessel gets caught puck watching as Larkin blows by him and another mistake was Evgeni Malkin who failed to protect the weak side to provide a security blanket defensively with the Penguins neutral-zone D.

3. Murray’s poor angles have cost him over last three games

Matt Murray allowed 4 goals on 23 shots in the loss. On paper his performance looked worst than it was.

He got beat on two great plays from Nyquist and Larkin.

You’ll live with that but the Frans Nielsen goal just can’t happen in that situation and that made it three 1-on-1 type goals allowed between the shooter and Murray that Murray got beat on. That’s still too many.

Sams obsessed with drool and bandwagons

If the Pens can just overcome Murray (and Letang) and get on a role.

Coincidence letang. Back and Murray on bench and team won. Whereas is that moron that said Murray suckss because of letang.

I hope Dumo and Jarry are ok. One of our most complete games this year. Big one on Thursday with the Canes. Need to build off of this.

Yeah flyer’s played shitt and now you can start drooling over pens victory and think they are cup contenders with this one game.

Reaves! And Sheary. How about that Sam the fat frog?

Yes dummy you can point that too me sukkss for you. Because you can’t do that often because it doesn’t happen often. This shows you are a moron. And wait that one in a million time this happens so you can brag and drool over sheary and other frauds go fly a kite fatso

I agree. This team would be nowhere near a playoff spot without him.

Letang and Schultz in practice today

It’ll be interesting to see how the next couple weeks play out. If we continue to slide, it’s kind of hard to justify trading future assets for help now. On the flip side, we have some aging players that could bring really nice returns. Our farm system is pretty dire and trading the likes of Letang and Hornqvist could net a lot of help in that department, while probably even giving us players that could help now and for a run over the next couple years. Not saying tear it down, but mortgaging the future when you’re in last place… Read more »

Pens never had good farm team sheary , Jake were hot at the time but long term they are not the answer. It’s like dagnault ,Byron were playing top 2 lines when they were hot now that the calm down they are where they are suppose to be but same goes for the hbk like when you droolers were cummingg hard in your pants and I said was just a flavour of the month and when same said once pens power play will dry out their 5v5 play will be more exposed and that is what happening with pens. Also… Read more »

My God. Haven’t been here for months and I didn’t think it was even possible but you’ve gotten dumber.

Just flavour of the month… they won a cup with the line… you do get that’s the point right?

Sam’s takes are about as bad as DK is at being a quality human.

So the question is why? I mean a lot of this was overcome in the last couple years. We are not strong strong play from the stars and while the depth scoring is doing them no favours they are still struggling in the top 6 as well. To a man they have underperformed this year even when healthy. They have lost a few bodies that were gonna hurt but it’s gotta be something more when the teams defacto top scorer is nicely below a PPG and still sitting at a -13. He’s the second highest producer in the calendar year… Read more »

Why the thumbs down from Sam and his crew? Good post Z.

That’s easy, because Sam thinks it’s a lack of MAF ignoring how historically average at best MAF has been when the team in front of him has been this bad!