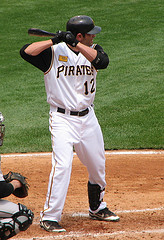 After “pushing hard” to trade Freddy Sanchez early this month, the Pirates have publically changed their stance and have indicated they are making an attempt to re-sign second baseman Freddy Sanchez and shortstop Jack Wilson.
On pace for a 71-91 season, which would become their 17 straight losing season, the Pirates are a public relations nightmare.
The timing to go public about re-signing Sanchez and Wilson is odd as the trade deadline is less than three weeks away and both players have been actively shopped for months.
If they wanted to make a strong attempt to re-sign both players, why not start working on an extension in June instead of mid-July and why go public with their intentions right before the July 31st trade deadline?
Yes, the market for Sanchez has died down a bit as interest from Colorado, Tampa Bay and Minnesota has cooled but when it comes to Sanchez, unless the Pirates are willing to offer a four year deal, worth upwards of $6 million per season, then this is nothing more than a “PR” move.
All indications are the Pirates initial offer to Sanchez was a low ball offer in the two year range.
A two year offer would keep Wilson but not give the Pirates a realistic chance at keeping Sanchez who only needs 252 atbats to trigger an $8.6 million option for next season.
More Sanchez Extension Talk
*Jon Morosi of Fox Sports writes, “Hard to believe the Pirates will retain talent”
* John Perroto writes, “offers to Wilson, Sanchez appear light”