Giants committed to finalizing a deal with the Pirates 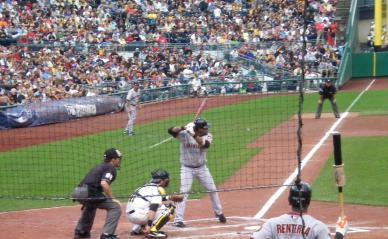 Sanchez Sweepstakes: The Pirates have not cut off talks with the Minnesota Twins or the Chicago Cubs but the team is pushing forward in talks with the San Francisco Giants and a deal could be announced as early as Wednesday evening.
The framework of a deal is already in place as Pirates have their choice of picking 2-3 prospects from a group of five prospects the Giants have deemed available in a deal for Sanchez. The Pirates are believed to have agreed to pay some of Sanchez’s salary. Inside Look at some names that are rumored to be heading to Pittsburgh.
The Giants top four prospects Madison Bumgarner, lhp, Buster Posey, C, Angel Villalona, 1B, Tim Alderson, rhp, are deemed untouchables.
Players rumored to be on the Pirates radar
Jesus Guzman – Age 25
Bats: Right , Throws: Right
Height: 6′ 1″ , Weight: 165 lb.
Position: Infielder
Stat Line: (Class AAA – .336 – 12HR – 59RBI)
Latest Buzz: Guzman has been an exceptional hitter in the minor leagues. The Pirates love his bat but Guzman doesn’t have a position. A source tells me the Pirates are looking at him as a infielder not an outfielder.
The Pirates covet a right handed bat with power potential, and Guzman has that potential. Latin American Scouting Director Rene Gayo has targeted Guzman in these trade talks.
Nick Noonan, Age 20
Bats: Left , Throws: Right
Height: 6′ 0″ , Weight: 180 lb
Stats: .249 – 5HR -48RBI’s
Position: 2nd baseman
Latest Buzz: Rated as the Giants #5 prospect by Baseball America. Noonan has been discussed extensively in the past 12 hours.
– Projects as a leadoff or No. 2 hitter with excellent bat control and good idea at the plate.
– Ability to hit for average, lacks power
– Great plate discipline
Heyman mentions a pair of career minor leaguers
*** SI.com’s Jon Heyman mentions first baseman John Bowker, infielder Kevin Frandsen as players that could be on the Pirates radar. Bowker, 26, hit 10 home runs and 43 RBI’s in 111 games for the Giants last season.
Frandsen is 27 years old and like Bowker doesn’t make much sense.
Adrianza unlikely to be involved?
Source tells TIOPS the Pirates like Giants reliever Sergio Romo but they don’t appear to be that interested in 19 year old shortstop Ehire Adrianza because the team remains confident that they will sign Miguel Sano.
Pirates high on 3B Conor Gillaspie
The Pirates absolutely love 3B Conor Gillaspie and with scouts believing Pedro Alvarez will be moved to first base, Gillaspie would be a great fit. The Problem: Giants aren’t that keen on moving Gillaspie
Pitchers the Pirates can select from
Henry Sosa (rhp), Waldis Joaquin (rhp), Jose Casilla (rhp), Clayton Tanner (lhp) and Jesse English (lhp).
Neal Huntington loves power arms and Joaquin is at the top of their radar. Tanner and English are obviously players of interest because of Huntington’s desire to keep adding left handed pitching.