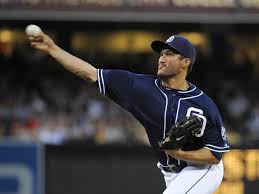 PIRATES TO BOLSTER BULLPEN?
In prime contention to contend for a playoff spot, Pirates scouts have been on the lookout for pitching help and the team isn’t just focused on the starting rotation.
“We are looking to add,” GM Neal Huntington said Sunday.
An argument can be made that the bigger need for the Pirates is in the bullpen, despite the uncertainty with how Francisco Liriano will bounce back in the second half and whether Gerrit Cole’s shoulder/Lat issues are truly just minor like the Pirates believe.
Things appear to be setting up for the Pirates perfect trade deadline target to be Padres closer Huston Street to solidify the bullpen with All-Star Tony Watson and Mark Melancon for down the stretch and next season.
Street, 30, has been lights out this season for the Padres with 23 saves, 1.13 ERA and 0.78 WHIP.
The cost would likely be a top tier prospect.
Street is currently making $7 million and although Huntington has never been a fan of paying relievers big money, Street has a club option in 2015 of $7 million.
San Diego’s Joaquin Benoit is also a top trade target for teams looking to bolster their bullpen.