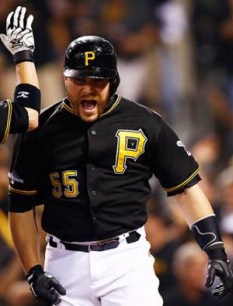 PIRATES 4 – BREWERS 2
Win: John Holdzkom (1-0)
Loss: Jon Broxton (4-3)
Save: Mark Melancon (31)
AROUND THE BASES
Regardless of whether the Pittsburgh Pirates (83-70) make a second straight post-season appearance, which is looking more likely by the day, If the team doesn’t step up this winter to resign Russell Martin, it’s going to be a PR nightmare.
Trailing 2-0 in the bottom of the 8th, Martin provided the heroics Friday night vs the Milwaukee Brewers (79-75), taking a Jonathan Broxton 96 MPH faseball deep for a three-run blast in thrilling fashion to give the Pirates a 3-2 lead.
“That was the sweetest right there. It doesn’t get sweeter than that,” Martin said afterwards. “It’s hard to be happier than that.”
Highlighted by Martin’s three-run homer, a roaring PNC Park crowd saw the Pirates rally from a 2-0 deficit with a four-run, eighth inning as Ike Davis followed Martin’s homer with an RBI single. The Pirates went on to win 4-2 vs the Brewers.
The significance for the Pirates was inching ever more closer to a playoff spot.
Winners of five straight, the Pirates have moved 4.5 games ahead of the Brewers for the second wildcard spot and the Pirates are suddenly closing in on the top wildcard spot. They trail San Francisco (84-69) by just one game.