Are the Steelers Back? 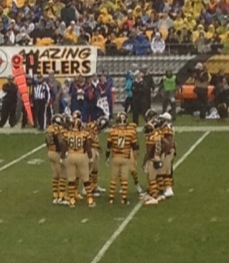 ARE THE STEELERS BACK?
The Pittsburgh Steelers got their signature win of the season with a 37-27 victory over a good Detroit Lions team and thanks to the play of Ben Roethlisberger Sunday, the Steelers can still realistically think about the playoffs for at least another week,
At 4-6, the Steelers are in a three way tie for second place in the AFC North and in a weak conference, they are one game out of being in a tie for the final wildcard spot.
The question now is “Are the Steelers Back”? My feeling after the Buffalo game was that the Steelers needed to win the next two (vs Detroit, @ Cleveland) before we could start saying they were back and I still feel that way, though, the conference is so bad that they are obviously in the playoff hunt as crazy as it sounds.
The Steelers are in the same kind of boat that they were in after beating the Jets and Ravens. At 2-4 they faced an Oakland team on the road that on paper was a favorable game and the Steelers stumbled. This Cleveland game is the same kind of scenario. Steelers take care of business in a winnable game in Cleveland then the Steelers could be in a position to get back to .500 Thanksgiving night in Baltimore, a matchup that is always a pickem between those two teams.
KEY DEVLOPMENTS FROM THE WIN VS DETROIT
— After the Steelers jumped out to a 14-0 first quarter lead, the Lions stormed back in the second quarter with 27 points and Calvin Johnson was unstoppable with 2 touchdowns, including a 79 yard TD reception, and Johnson had 163 yards receiving alone in the 2nd quarter. Suddenly trailing 27-20 at the half, a lot of 3-6 teams would have just imploded and quit. Mike Tomlin has taking a ton of heat this season but his team didn’t quit and the Steelers went on to outscore the Lions, 17-0 in the second half.
— A mystery is how the Steelers shut the Lions down in the second half, most importantly Calvin Johnson. Johnson finished the game with 6 catches for 179 yards and 2 touchdowns but had no catches in the second half. He was TARGETED JUST THREE TIMES in the second half which is a head scratcher from the Lions end. The Steelers inexcusably trusted Ike Taylor to hang with Johnson in the first half, a huge mistake by the coaching staff. The second half, Taylor was given help over the top and the Steelers were even sending a Linebacker or Nickle back wide to chip Johnson at the of scrimmage. A good adjustment but how do the Lions still only target Johnson three times in the second half? That one is still hard to come around on.
— The Steelers won the turnover battle 3-0 and got an impact game from Will Allen who forced a fumble and had an interception.
— The biggest development Sunday wasn’t the defense shutting out the Lions in the second half but it was the Steelers offense showing they can outscore an elite offensive team and win a shootout. The Steelers put up 37 points, their most since putting up 38 against Tennessee in the 2011 season. The surprise development: The coaches putting their egos to the side and running the no huddle prominently and going no-huddle at the start of the game. It caught the Lions off guard as the Steelers jumped out to a 14-0 first quarter lead, scoring on their first two possessions.
— Ben Roethlisberger played like a true franchise quarterback for one of the few times this season. Roethlisberger was tremendous going 29/45 for 367 yards with 4 touchdowns and a 119.4 QB rating. The key line for Roethlisberger: No turnovers and was sacked just once. Roethlisberger was previously 0-9 in the last nine games he threw 40 or more passes in a game.
— Antonio Brown’s monster season continued with 7 receptions for 147 yards and 2 touchdowns. He set the tone with touchdown receptions of 34 and 47 yards in the first quarter and on the TD’s he had 68 yards of YAC, turning short passes into big scores. Brown has 74 receptions for 952 yards and 5 touchdowns.
— The Steelers have replaced Mike Wallace’s touchdown production with Jerricho Cotchery who scored the game clinching TD pass with 2:29 left to put the Steelers up 10. Cotchery has 7 touchdowns on the season.
— Emmanuel Sanders injury opened the door for Markus Wheaton being more involved in the offense. His best game as a pro with 3 catches for 38 yards, including a long of 21. Not a bad thing as Sanders won’t be back next season.
— The drive of the season for the Steelers: 16 plays, 96 yards – 4th quarter scoring drive resulting in a Roethlisberger to Will Johnson 1 yard touchdown pass. The Steelers got the ball with 12:49 left in the game and trailing 27-23. They ate up 8:03 of the clock.