Can the Blackhawks learn their lessons one game earlier than the Penguins did a year ago? 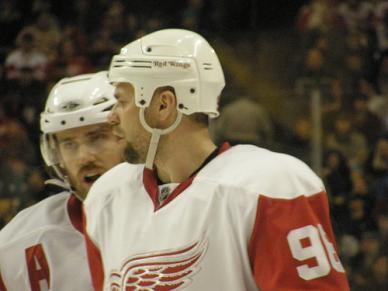 The Red Wings drew first blood in the Western Conference finals in Detroit on Sunday afternoon, when they schooled the Chicago Blackhawks, 5-2, and one word was heard more then the rest afterward – experience.
If the scenario sounds familiar to the Penguins and their fans, then it should. That was much the same story line early in the Stanley Cup finals a year ago, when it took the Penguins until Game 3 to comprehend the challenge that confronted them.
By that time, they trailed 2-0 in the series, a deficit that was too much for a young team to overcome.
Firepower isn’t the issue here. The Blackhawks have enough to match the Red Wings in a best-of-seven series. In terms of postseason know-how, however, the two teams don’t reside in the same state much less zip code.
In Game 1, the Red Wings active roster totaled more than 1,500 games of postseason experience, more than three times that of their opponents.
The Blackhawks did some things well in the opener. They got off to a fast start, which was a top priority after their
many early deficits in the first two rounds. When forward Kris Versteeg tied the score at 2-all early in the period, the visitors were very much in the game.
In the final 16 minutes, the difference in playoff savvy showed even more. One never got the feeling that the Red Wings were in trouble at any point in the game. Now the Blackhawks face an almost certain must-win situation on Tuesday night, because a 2-0 deficit could result in a short series.
The Penguins should hope like heck that the Blackhawks pull it off, because a six- or seven-gamer would be in their best interests provided that they advance to the next round.
The Red Wings have some age spots on the back line, where 35-year-old Brian Rafalski and 39-year-old captain Nicklas Lidstrom are the twin anchors. Goaltender Chris Osgood is 36 years old. The more these guys are tested in this series, the less they may have in reserve in the next one.
The question is whether the Blackhawks can learn their lessons one game earlier than the Penguins did a year ago.