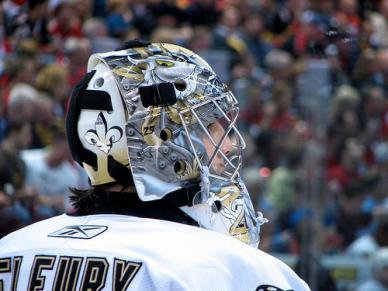 Pittsburgh Penguins goaltender Marc Andre Fleury was chased from the net as Brian Gionta had two goals and an assist leading the Montreal Canadiens to a 5-3 victory over the Pittsburgh Penguins on Saturday afternoon at the Bell Centre.
Fleury was pulled in the third period after giving up four goals on 28 shots as Pittsburgh trailed 4-2 early in the third. Playing in front of family and friends, Fleury was not happy about being pulled at 7:15 of the third but the bigger issue for Pittsburgh was the way Montreal took the play to them at both ends of the ice.
Pittsburgh was outshot 32-21, as the Canadiens initiated the play and didn’t sit back. Montreal set the tone and Pittsburgh wasn’t able to slow the Canadiens offensive attack who have now won three straight games.
“We were initiating the play,” Canadiens forward Brian Gionta said. “We weren’t sitting back and waiting for them to come to us. Against a team like that, so skilled, so offensively talented, you need to initiate the play and get them back on their heels.”
Head coach Dan Bylsma was not happy with the way his team performed as the Penguins two game winning streak came to an end.
“I don’t think we played a very good game today as a team, and that’s a very disappointing way to lose a match,” Bylsma said.
Bylsma was especially not happy with the Penguins undiscipline play as the Canadiens had seven power play opportunities compared to Pittsburgh’s three.
Pascal Dupuis (13), Bill Guerin (17) and Evgeni Malkin (20) scored for Pittsburgh.
For Pittsburgh a concern leading up to the trade deadline remains their play in the defensive zone. Defensive zone breakdowns continue to be a constant problem along with positioning of their defensemen, who are struggling to clear the front of the night.
It was not good day for defensemen Mark Eaton and Kris Letang who were each a minus-3
Ruslan Fedotenko who has the worst plus/minus rating (-12) on the team, was a minus-2 on the afternoon.
Martin Skoula, Chris Kunitz, Eric Godard and Max Talbot were scratches for Pittsburgh. Talbot (groin) did not travel with the team. Chris Kunitz (abdomen) is hopeful to play tomorrow and will participate in warmups.
The Penguins are staying in Newark, New Jersey and plan to take a charter bus to Washington D.C. for tomorrow’s game.
No official time change or postponement has been made. Any kind of announcement is not expected until the morning a team official told me.