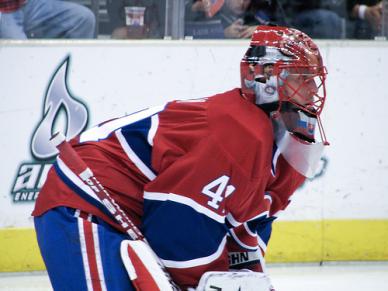 Montreal 3 – Pittsburgh 2
The Pittsburgh Penguins fell to the Montreal Canadiens 3-2 Thursday night in game 4 of the Eastern Conference semi-finals. The series is now tied 2-2.
The loss was a missed opportunity for Pittsburgh, who dominated play through two periods, out-shooting Montreal 26-9. Pittsburgh though only held a 2-1 lead after forty minutes.
The Penguins let Montreal hang around and Maxim Lapierre and Brian Gionta scored a 1:33 apart early in the third period as Pittsburgh suddenly trailed 3-2 just 3:40 into the third.
Facing the possibility of going down 3-1 in the series against the defending Stanley Cup champions, Montreal played with desperation in the third, out-shooting Pittsburgh 16-9 and controlling the play offensively.
Canadiens goaltender Jaroslav Halak continued his stellar play, making 33 saves in the win and playing a pivotal role in the Canadiens stealing game 4.
Halak kept Montreal in the game through the first two periods and came up big in the third, making a right pad save on an Evgeni Malkin breakaway chance with less than four minutes remaining in the game.
The Canadiens continue to defy all odds by getting dominating goaltending and timely goals. “We’re not supposed to be here, no one picked us to win,” Mike Cammalleri said. With the series now a best-of-3, Montreal is a confident team as the series shifts to Pittsburgh Saturday night for game 5.
The Penguins five game road winning streak was snapped and the inability to put the Canadiens away was the difference in the game, according to Sidney Crosby who had an assist in the game to snap a two game pointless streak.
“They hung around,” Crosby said. “That’s probably the difference.”
Tom Pyatt opened the scoring 2:34 into the game with a shot from the left corner that somehow got past Marc Andre Fleury.
Pittsburgh responded quickly and jumped on the Canadiens in the first. Max Talbot (2) scored at the 3:27 mark, beating Halak with a breakaway goal and Chris Kunitz (3) scored less than two minutes later on the power play to give Pittsburgh a 2-1 lead and momentum tilted in Pittsburgh’s direction.
Pittsburgh outshot Montreal 15-6 in the first and 11-3 in the second.
Pittsburgh’s Jordan Staal returned to the lineup just six days after having foot surgery. Staal played a 4th line role for the most part and had 2 shots on goal and 13:24 of ice time. Staal was a minus-1 in the game and is now a minus-5 in the playoffs.
Penguins head coach Dan Bylsma said that Staal didn’t miss a beat and was pleased with his play in what is being described as a shocking return.
With Staal returning and Bill Guerin sidelined with back spasms per sources and