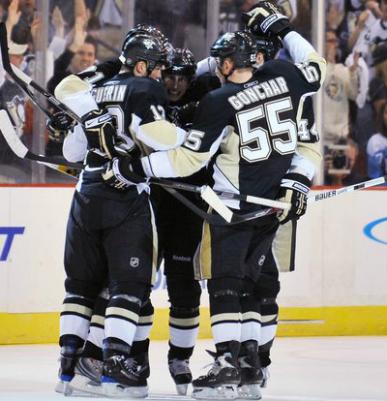 Pittsburgh 2 – Montreal 1
The Pittsburgh Penguins have taken a 3-2 series lead over the Montreal Canadiens as Kris Letang and Sergei Gonchar each scored and Marc-Andre Fleury had a superb game, making 32 saves to lead the Penguins to a 2-1 victory on Saturday night at Mellon Arena in Game 5 of the Eastern Conference semi-finals.
Sidney Crosby was held without a goal for the 6th straight game but it was Pittsburgh’s production from their backend that helped seize a 3-2 series lead over the Canadiens.
Kris Letang scored at 18:18 of the first period on the power play for his 4th goal of the playoffs surpassing his total from the regular season. Letang who struggled in game 4, responded with the opening goal and a strong defensive game.
Gonchar added a second period goal at the 9:50 mark on a set up from a makeshift line of Mike Rupp, Evgeni Malkin and Mark Letestu. After winning a battle in the corner, Letestu moved the puck up to Brooks Orpik at the left point who fed Gonchar for a one-timer from the right point for his second goal of the playoffs.
Letestu assisted on the goal for his first career playoff point. The Wilkes Barre callup played a strong game in a 4th line role and has put himself in prime position to not only stay in the lineup for the playoffs but also earn a full time roster spot next season.
To those who have scouted Letestu this season, it is not a surprise that he has filled a 4th line role admirably despite limited NHL experience.
Gonchar’s second period tally was the difference maker that ended up being the game winning goal as Mike Cammalleri scored a power play goal with just 31 seconds remaining in the game to cut the Penguins lead to 2-1.
Pittsburgh’s production from their group of offensive defensemen in the playoffs has been a positive in the post-season.
Gonchar is third on the team with 10 points, while Alex Goligoski has 7 points in 11 games and Kris Letang has 4 goals in the post-season which ties him for second on the team.
Coming into game 5, Pittsburgh was 2 for their past 11 on the power play, which prompted the coaching staff exploring different options with their 1st unit during Saturday’s morning skate, that included Evgeni Malkin and Sergei Gonchar working the points and Kris Letang off the 1st unit.
The morning skate 1st power play unit though was just exploratory as Kris Letang remained on the 1st power play unit come game time and delivered.
Montreal outshot Pittsburgh 33-25 and had a late flurry of scoring chances in the final seconds as Pittsburgh’s Marc Andre Fleury shut the door to secure the win.
Fleury rebounded after a subpar performance in game 4 to earn his 7th victory of the post-season. Fleury improved to 15-5 after a playoff loss and has now won six straight after a loss.
Penguins head coach Dan Bylsma was aggressive in switching up his lines and pushed the right buttons in game 5, making Alexei Ponikarovsky and Ruslan Fedotenko healthy scratches.
Bylsma relied heavily on Sidney Crosby and Evgeni Malkin early on as the duo had five first period shifts together and had three more in the second period.
Malkin assisted on Letang’s power play marker and was dominant at times through the first forty minutes of the game.
Crosby meanwhile was pointless for the third time in five games. The Canadiens continue to neutralize Crosby who has yet to score in the series. Crosby was held without a shot through the first two periods and added just one shot in the third period.
An area of focus for Pittsburgh was providing more traffic in front of Jaroslav Halk and the Penguins accomplished that goal.
On Letang’s 1st period tally, Sidney Crosby and Bill Guerin provided traffic in front of Halak and on Gonchar’s goal, Rupp drew a screen on Halak by drawing forward Tomas Plekanec and defenseman Josh Gorges to him.
Rupp returned to the lineup after being scratched in game 4. Bill Guerin also returned to action after missing the past two games with back spasms.
Defenseman Brooks Orpik led the Penguins with 22:28 of ice and was tied for a team high 4 blocked shots. Winger Chris Kunitz led the Penguins 7 hits as the Penguins played a physical game, outhitting Montreal 35-23.
Game 6 is Monday night