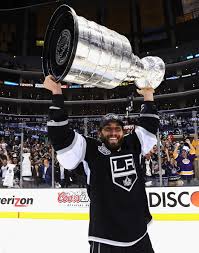 CONFERENCE FINALS BUZZ
There’s no denying that the four best teams in hockey are still playing. The NHL could not have hoped for a better conference finals in the East with Pittsburgh vs Boston and in the West with Chicago vs Los Angeles.
When people take off the homer glasses in their respective cities, I believe there are valid arguments to be made for the Blackhawks, Kings or the Penguins to be the ones hoisting Lord Stanley in late June. Not one of those teams is head and shoulders above the other.
I’d call the Bruins the underdog of the final four teams but it wouldn’t be a shock to see them reach the finals for the second time in three years.  56 players on the remaining four teams have won Stanley Cups with Los Angeles (19) leading the way, followed by Boston (18), Pittsburgh (11) and Chicago (7)
“With teams you mention probably doesn’t make it any easier,” Sidney Crosby said of the remaining playoff field. “Just kind of adds to the intensity and how difficult it is to win at this time of the year.”
Brooks Orpik talked about the four remaining teams being the past four Stanley Cup winners…..
“Just think it makes it more exciting for the fans,” defenseman Brooks Orpik said. “Obviously it’s teams that know how to win, know what it takes to win, so if anything just experienced teams that are familiar with different situations that are thrown at them.
“You’re not going to have a young team that’s gets rattled with a situation they’ve never been in,” Orpik said. “Important thing when you look at those four teams, not a lot of big change over, lot of same guys. Think Boston has 16, 17 guys that were on their Cup team few years ago. LA and Chicago are the same and I think we have around 10.”
A Blackhawks – Kings conference finals matchup might not have been as the Blackhawks almost had last night’s Game 7 vs the Red Wings taken away from them when referee Stephen Walkom made a ridiculous call waving off Niklas Hjalmarsson’s go-ahead goal with 1:47 left in regulation.
Way behind the play in the neutral zone with no effect on the Blackhawks odd-man rush, Chicago forward Brandon Saad and Detroit defenseman Kyle Quincey got tangled up in front of the Red Wings bench as Quincey came charging at Saad after the Pittsburgh native made a clean check on Henrik Zetterberg leading to the turnover. Walkom stopped play to give roughing penalties in a terrible call. If anyone should have received a penalty, it should have only been Quincey.
“Usually I don’t watch much but with this much time off, can’t help myself,” Orpik said of tuning into last night’s game. “Just relieved for the referee {Stephen Walkom} there that Chicago ended up scoring again, kind of let him off the hook. He’s a local guy too, he’s a pretty good referee most of time.”
Looking towards the Cup Finals, a Blackhawks – Penguins Stanley Cup Final would be a tremendous matchup of skill and showcase the two most talented teams but the defending champion Kings might be the most complete team left in the playoffs and some great hockey minds in the industry argue that the Blackhawks would be a more favorable matchup for the Penguins.
Bylsma when asked during today’s media session by the Trib’s Josh Yohe about the Blackhawks and Kings in the West, Bylsma admitted that he doesn’t have a good feel about the Kings.
“One team I don’t have a great feel for is Los Angeles, because we haven’t played them, because we don’t see a ton of them,” Bylsma said. “I watched them a lot last year and what they did in playoffs and winning Stanley Cup. They’ve been able to be that team again especially down the stretch and in the playoffs. I hear a lot about them than I actually know. Hear about defensive side, goaltending, how big and imposing they are and have played, and they’ve been able to do that again.”

Penguins have one unvaccinated player

A December return for Evgeni Malkin?