Thursday’s Daily 5: Whether the Pirates like it or not, Tabata is one of the best-25 for the roster right now 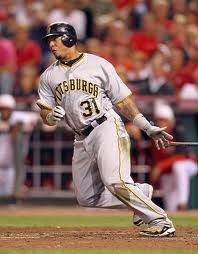 1. Pirate management and most of the coaching staff can’t stand Jose Tabata but he’s one of the Pirates best 25 right now. Unfortunately Corey Hart is finished with his cranky knees and Tabata might be the guy who can give the Pirates some quality play in right field for the next little while and be an option a couple games a week if Gregory Polanaco’s inconsistencies continue, which are likely.
Tabata is what he is, a singles hitter and not much more but he’s still less than two years removed from posting a 282/.342/.429 batting line during the 2013 season. With the plate discipline Tabata had showed in Triple-A, give the Pirates credit for not being hard headed and being against giving Tabata a look, as it was only a couple weeks ago that GM Neal Huntington said if Tabata’s going to get back in the Majors, it would probably be with somebody else.
2. Clint Hurdle came out this week and took the blame for the Pirates inconsistent start to the season. “It’s not so much a personnel question. It’s performance and that falls on me,” Hurdle said.
The Pirates having a back of the rotation problem should have been expected, in addition to a bench problem. New additions like Corey Hart and reliever Antonio Bastardo are not panning out but the primary area of the Pirates consistencies this season starts with the starting position players.
When you breakdown this team and struggles for Andrew McCutchen much of this season, Josh Harrison taking six weeks to find his swing, Gregory Polanco not making the transition like the Pirates had expected, Pedro Alvarez continuing to be Pedro Alvarez, maybe the Pirates are lucky to be 18-22 right now.
3. About that Simon Despres trade again…..

Not all of GM Bob Murray’s moves work but he’s getting away with grand theft for his heist of Simon Despres. And maybe Jakob Silfverberg.

Despres game winning goal tonight gives the Ducks a 2-1 series lead.
4. Gary Bettman told reporters in Chicago today that he expects the salary cap for the 2015-2016 season to fall in the range of $71 million, pending the players accepting the 5% escalator. No guarantee they do and if the players don’t, the cap would stay in the $68-$69 million range.
If the Penguins learned anything from last season, the biggest priority should be leaving at least $2 million in cap space to start the season.
5. Anyone surprised by the up and down hockey in the Eastern Conference Finals that’s featured a skilled game shouldn’t be. This is what happens when the NHL’s No. 1 and No. 3 scoring teams (regular season) get together and you don’t have coaches trying to dumb down the game like so many did in the earlier rounds, highlighted by Mike Johnston of the Penguins.