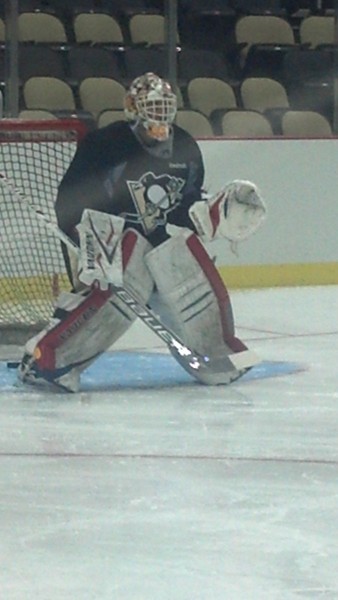 PITTSBURGH PENGUINS DEVELOPMENT CAMP 2013
SCRIMMAGE ANALYSIS: GOALTENDERS
By Dave Fryer, Contributor to InsidePittsburghSports.com
Sean Maguire started the game in net for the black team, and he had the strongest performance of all the goaltenders after looking like he may not be able to top his peers through most of the week. His game was steady all week, and he maintained that in the scrimmage. But Maguire also added a bit of flair, looking more agile and athletic on a few saves. The lone goal that got behind him was on a penalty shot. Maguire made a blocker stop on another penalty shot, stabbed out his right pad to turn aside a good deflection, and showed tremendous flexibility on a save in the six-man shootout at the end of his half.
Eric Hartzell played the first half for the white team and only allowed a single score – the laser off the stick of Matia Marcantuoni – during his 25 minutes. Hartzell presented himself quite well all week and even provided some evidence that he still has a lot more upside than originally expected. He works extremely hard and comes across as being dedicated to his skills, conditioning, and mechanics. “This week, we liked his work ethic, you like his athleticism, and we think we have a real competitor in net. And with a little bit of growth and development, we think he has the potential to be an NHL goaltender,” said Wilkes-Barre head coach John Hynes. Hartzell on Saturday agreed to a two year, two-way deal worth $550,000 at the NHL level.
Tristan Jarry looked very anxious to get in the game, and he got his chance in the second half for the white team. He played a steady 25 minutes and made a good save with his glove-side arm on a penalty shot by Adam Payerl. The only two goals he allowed were on well-placed shots that came from clean looks at the net that. Jarry was questionable to play leading into the day after getting hit on the collarbone with a shot on Friday. But he was eager to get the opportunity, clearly looking restless on the bench in the first half.
Matt Murray had the most-inconsistent performance of the four goaltenders. On the positive end, he made a good blocker save on a breakway by Kuhnhackl and two solid saves in the shootout. On the other end of the spectrum, two of the goals he allowed were on pucks that initially hit him and slipped through him. The other goal he yielded was originally a whiff by Jayson Megna that drew Murray to the ice, then he could not recover when Megna immediately gathered the loose puck in the slot and danced to the wide side. Reviews have always been mixed on Murray, and the ups and downs in his game demonstrate why. But he has the size and skills to develop into an exceptionally good goaltender down the road.
“I know we feel real comfortable where our goaltending is down the line,” assistant to the GM Tom Fitzgerald said. “Goalies take longer, of course. A year ago in Pittsburgh, at the draft, we didn’t have any in the system. Now we have four, you know, that can work their way through their college career, their junior career.”