Kennedy skates for first time since November 5th; Letang to return against MTL? 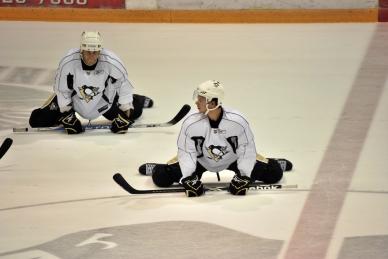 Winger Tyler Kennedy skated on Thursday for the first time since Pittsburgh’s morning skate in Los Angeles on November 5th, sources tell Inside Pittsburgh Sports.
Kennedy has missed 10 of 11 games.
Kennedy did not travel with the team on their three game road trip and skated at Mellon Arena for about 30 minutes. He is expected to skate again today.
Kennedy has what is being described as a groin/hip related injury. He saw a specialist
last Friday and surgery has been ruled out. Kennedy first came down with the injury in late October and it is regarded as a 4 week injury.
More injury news
*Defenseman Brooks Orpik is set to return tomorrow night against the Atlanta Thrashers. One defenseman who won’t sitting with the return of Brooks Orpik is Ben Lovejoy. Lovejoy has played very well the past two games.
*Kris Letang is expected to be cleared for contact this weekend. Letang should be able to return to the lineup on Wednesday against the Canadiens.
*Winger Chris Kunitz has not been on the ice to this point since being shutdown by the medical staff.
*The same for Alex Goligoski. His knee injury is at least a 4 week injury. The team has been very quiet about his status since he had an MRI last week.