‘That will solve everything’……..

Mike Tomlin deserves to be criticized to the extent he is today for being passive in Sunday’s debacle but anything beyond that is wrong when it comes to him losing his job for Sunday’s loss.

The job of the head coach is to make high pressure decisions based on where momentum is going and Mike Tomlin failed in the third quarter when the Steelers were buzzing. Tomlin was living in his fears by trying to play the field position game. The decision to punt had logic in trying to pin the Browns back as Tomlin’s defense was finally showing some life, but that logic loses value when you factor in that you have a JV level punter, which the Steelers do.

So, yeah, it was a major coaching blunder by Tomlin because he has Jordan Berry as his punter and was putting faith in Berry to win the field position game.

But, let’s not kid ourselves.

This game was lost by player performance, not coaching scheme, a 4th and 1 decision, or the easy way out of saying the Steelers were unprepared, unmotivated, ect.

Pittsburgh’s best players came up extremely small, while Cleveland’s dominated them across the board.

Baker Mayfield was head and shoulders better than Big Ben. Nick Chubb and Kareem Hunt were game breakers, Jarvis Landry was one of the best players on the field. The list goes on and on to Cleveland winning the line of scrimmage in a major way.

Cleveland’s depleted offensive line bullied the Steelers vaunted defensive line, a matchup that on paper was a significant advantage for the Steelers coming in. How bad Stephon Tuitt and Cam Heyward were in this game was something else. T.J. Watt ran out of gas late in the season and that played out on Sunday in what was also an extremely underwhelming and disappointing game from Watt, though, the Browns did a great game planning and execution job of limiting Watt by how efficient and quickly Mayfield moved the ball and eluded the rush with his legs.

This group didn’t get ONE Quarterback Hit against Baker Mayfield.

The Steelers finishing the season 1-5 wasn’t some fluke. That’s who they really are. Mike Tomlin getting 12 wins out of this group should be applauded. This game was lost by Pittsburgh’s best players from Ben, Pouncey, to the defensive stars and others coming up so small.

It was just a domino effect of how badly so many of the Steelers key players and core units underperformed with the level of play embarrassing in some cases.

Pack your Bags Big Ben, among others

A crying Ben Roethlisberger on the field as the clock hit zero had many wondering if he was going to hint afterwards that this was likely it for him.

As the dust settled that wasn’t the case at all. Roethlisberger sounded like a player who will force the Steelers hand to ‘bring me back or cut me’.

We all know about how the Steelers are backed into a corner with the $41 million cap hit. What they can’t do is let the second half against the Colts and the Browns make them into believers that they can get another great run out of Roethlisberger.

It’s over for Ben as an upper echelon quarterback or even a top-15 quarterback. Some pundits outside of Pittsburgh listing Roethlisberger as the 6th or 7th best quarterback in the AFC playoff field wasn’t crazy talk. The Steelers have the 4th best QB in the division, whether Roethlisberger is back in 2021 or not.

Those are just facts.

What we saw again in the first half against the Browns is what Ben really is at this stage of his career and it’s not just magically going to get better next season. The Steelers can’t fool themselves anymore.

In the first half against the Browns, 75% of Roethlisberger’s attempted passes were under 10 yards. That’s who Ben is and will continue to be. These second half surges against the Colts and Browns were nothing more than Ben picking apart prevent defenses.

The eyes now deceive Big Ben to a big extent and that was the most glaring sign for Roethlisberger over the second half of this season. He just no longer see’s the field at his former elite level and combine that with the arm no longer what it was and you get what you saw in the first half against the Browns where he forces things when he doesn’t want to get hit. Most concerning, though, is just how much he got fooled this season when defenses were disguising coverage once there was enough tape on the Steelers 5 yard route offense.

The 4th quarter interception in last night’s game was the type of mental breakdown from Roethlisberger that became a normal occurrence during the Steelers final seven to eight games.

For the Steelers, you have to start the offensive rebuild now instead of just putting it off another year. Thank Ben for all the memories even at the expense of a $22 million dead cap hit, get a new offensive coordinator in there, and exhaust every avenue in exploring the trade market for a younger quarterback with upside that can come in and start (Sam Darnold as an example).

If not, go the veteran stop-gap route, and look at every option of going QB in Round 1 or 2 for the right guy.

It’s just time to start this process and the end of the day that means moving on from Ben. That process can’t start with him coming back in 2021.

As for the offensive coordinator, the Steelers need to do an extensive search and bring in a young mind that can add more creativity and development to the offense. Maybe Matt Canada is the guy. The Steelers, though, need to make sure and shouldn’t just hand the job to Canada if they do indeed let go of Randy Fichtner, who is very close to Mike Tomlin.

What doesn’t get enough play is that time has run out for Keith Butler. Just clean house at both coordinators spot.

There’s so much talent on this defense, they should be a good to great unit by default. Things have just reached the point where ownership has to step in and demand the need for another voice and who can bring new ideas to this unit.

Someone has to be the fall guy for another playoff defensive debacle. 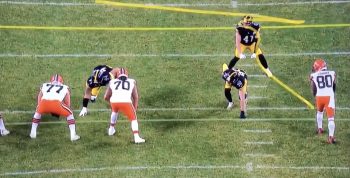 It was insanity all over again for Butler on the playoff stage as Robert Spillane was put in situations of covering Jarvis Landry all night in the slot. Pack your bags Keith Butler.

ZAR already on the IR lol

Big Ben has never been an elite quarterback. He in his prime was a very good NFL quarterback and that tie has passed. Look at the three Super Bowls he was involved.. – He was 2 -1 – His first super bowl versus Seattle Ben was adequate and did just enough to win. Jerome Bettis and Hines Ward on a trick play for Antwon Randle L were the main factors for victory… – His second super bowl versus Arizona he was terrific especially in the final drive..great job – His third Super Bowl he was awful against Green Bay and… Read more »