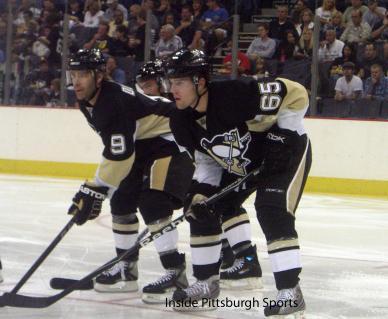 Pens eyeing Fransson to play a top-6 rolestrong>
The Pittsburgh Penguins continue to be enamoured with puck moving defenseman and the team has expressed a strong interest in Swedish defenseman Johan Fransson.
Fransson, 25, had 11 goals and 19 assists for Luleå HF.
For the Penguins to lure Fransson to the NHL, it’s going to take at least a one way contract on a multi-year deal.
Fransson has a new deal in place with Lulea HF and at least reportedly has agreed to a two year deal with Dynamo Minsk in the Kontinental Hockey League.
When asked for comment, Peter Wallen, the agent for Fransson would neither confirm nor deny that Fransson has an agreement in place with Dynamo Minsk.
The Penguins scouting staff believes Fransson could fill a top-6 role.
At 6-1, 190 lbs, Fransson is an excellent skater and possesses good offensive skills. A concern from a North American scout I spoke to this morning is that Fransson plays a European style game and when it comes to his defensive abilities, some believe he could be overmatched at the NHL level.
Meanwhile, it remains to be seen if a pursuit of Fransson is impacting Ben Lovejoy’s chances of getting a one way contract.
The Penguins have been in contact with Robert Murray, the agent for Lovejoy but talks have somewhat stalled as Pittsburgh has all the leverage with Lovejoy set to become a RFA.
Murray is seeking a one way contract for his client and Pittsburgh has not showed that willingness yet.
Members of the organization are not as high on Lovejoy that former assistant GM Chuck Fletcher was.