The Penguins destined to be amped with cap space due to unloading Marc Andre Fleury’s (though money may dry up if they commit long-term deals to their key RFA’s) contract later this week and maybe another contract, has sparked speculation that the team may chase a big fish. 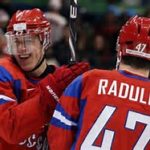 [“With so much money to improve the team, several information circulate to the effect that the Penguins have an interest towards Alex Radulov, who will become unrestricted free agent July 1. The Penguins do not have the right to discuss with Canadian striker before the end of June, but it seems that Evgeni Malkin would love to play with his compatriot and friend. It is obvious that Radulov should probably accept a smaller contract if he joined the Penguins, but it seems that at the moment he is trying to reach an agreement with the Canadian. Remains that the Russian forward remains very greedy, especially because he desires a very long-term agreement.”]

Radulov is seeking a 7 year deal from the Canadiens which is a non-starter for Montreal and just about every other NHL team.[/hide]

Meh. Anybody for the right price, but the pens don’t need a long term contract for a 30ish for anybody that is not Malkin or Crosby. Not even Murray, who not only has not proven to be a workhorse yet, but has Tristan Jarry to mind. One of these two goalies will be the centerpiece of a major deal down the line. They need to resign some, extend some, address the possibility of 58 missing time often, and maintain the stream from the AHL. 1st priority for new signs should address PK, faceoffs, etc as they stand to lose big… Read more »

one russian is enough on any roster

Not for 7 years… Semin did that, had the good return year and then inked long term and went to bed. If he would take a couple years at a reasonable amount to try and win then why not? Fuckk 7 years tho

I agree Zero – if I was giving 7 years to a player- he wouldnt make “the list”!

They just don’t need wingers to begin with – they need a third line center and a stud defenseman that actually dresses.