Takeaways & Observations: Penguins dictate terms of play in most complete game of season vs Caps 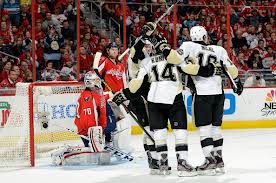 PITTSBURGH 4 – WASHINGTON 0
The Pittsburgh Penguins (14-8-0, 28 pts) put together their most complete game of the season and it was a 60-minute clinic by the Penguins against a quality Washington Capitals (12-9-1, 25 pts)  team. Just a tremendous overall performance by the Penguins securing a 4-0 win.
“Certainly the pace and how we played was excellent,” Penguins coach Dan Bylsma said afterwards. “We got some real good scoring opportunities.”
Paul Martin (2), Beau Bennett (1), Sidney Crosby (11) and James Neal (2) scored for the Penguins in the win. Crosby had a tic-tac-toe power play goal and added an assist giving him 28 points on the season. Evgeni Malkin had 2 helpers to give him 12 assists in his last nine games. Malkin has now gone 15 games without a goal but again played a very effective game and was 6 of 9 in the faceoff circle.
Marc Andre Fleury made 18 saves to record his second shutout of the season and 25th of his career.
Here are some key takeaways from the win:
GAME PUCK