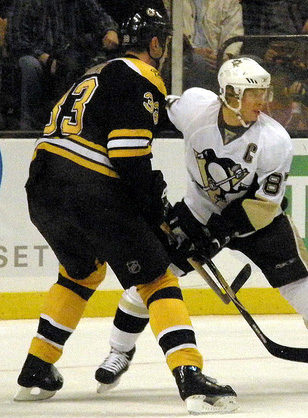 The Penguins would like for the Eastern Conference Finals to begin on Monday and get some of their key players healthy.
If the Boston Bruins win tonight, the NHL has to work around the Celtics schedule. If the Magic force a game 7 tonight, the Celtics will play at home Sunday afternoon. Therefore, the East Finals would likely start Monday night in Boston.
Mellon Arena is booked on Sunday and Tuesday of this week. If Carolina wins, we’re likely looking at a Monday start in Pittsburgh.
There’s some talk going around this afternoon that the Penguins have been informed they won’t play Saturday night.
The schedule will be released Thursday night.
As expected Sergei Gonchar played last night and he clearly wasn’t 100% but he felt more comfortable as the game went on.
Gonchar cannot suffer any long-term damage by playing and he will just have to play through some discomfort for another 5-7 days.
Penguins General Manager Ray Shero was very
emotional prior and after the game, speaking to reporters. Shero claimed on many occasions that this team has come so far and you can tell that he believes this is a special group.
Shero made a bold move, firing head coach Michel Therrien, less than a year after leading the Penguins to the Cup Finals and made up for his mistakes in free agency and landed Bill Guerin, Chris Kunitz at the trade deadline.
When healthy Sidney Crosby is showing the hockey world that he is the games top player. We’re watching something special here.
Alexander Ovechkin had a sensational series recording 8 goals – 6 assists – 14 points against the Penguins. Despite the production, we keep hearing the Penguins shutdown Ovechkin from fans and the media.
That’s news to me. You don’t shutdown a player who had 14 points in 7 games.
10 players registered points in Wednesday’s 6-2 win.
The players in the room talked after the game that it doesn’t matter to them who the Penguins play but any team wants home-ice and the Penguins are pulling for Carolina to upset the Bruins.
Carolina is the better matchup for the Penguins, despite the ability of Hurricanes goaltender Cam Ward to steal a series.
The way things look, the Bruins are going to take care of business and win at home. They have all the momentum right now.
If the Penguins get the Bruins, Evgeni Malkin is going to play a big factor in the next series. Crosby is going to get the Chara pairing and Malkin will have to be a major difference maker.
The Penguins set another ratings record Wednesday night, registering a 24.97 average rating on FSN Pittsburgh, according to Nielsen Media Research.
The Penguins are off today and will not return to the ice until Saturday morning at Mellon arena, which likely means they have been informed they won’t play until Sunday or Monday.
Photo courtesy of dan4th