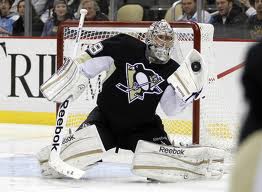 PITTSBURGH 3 – NEW JERSEY 0
Sidney Crosby (1) and Chuck Kobasew (1) scored first period goals and Marc Andre Fleury recorded his 24th career shutout, leading the Pittsburgh Penguins (1-0-0) to a 3-0 shutout win over the New Jersey Devils (0-1-0) in Thursday night’s home opener at the Consol Energy Center.
Fleury who was not tested much in the first two periods, was excellent in the third period with 12 stops in the period, including a few highlight reel saves, and turned away Adam Henrique on a penalty shot. Fleury notched his 250th career win with the victory and he was all smiles afterwards as were his teammates who at least publicly feel the criticism towards Fleury has been unwarranted.
“We believe in Fleury,” Sidney Crosby said. “I don’t think there’s any doubt in here. He made some great saves. There were some beauties.”
Craig Adams (1) added a third period goal and playing in his 800th career game, Adams earned the games No. 3 star. Beau Bennett, Tanner Glass, Brandon Sutter, Evgeni Malkin, Matt Niskanen and Pascal Dupuis each picked up assists in the win.
Devils netminder Corey Schneider making his first career start at Consol Energy Center, was not sharp making 18 saves on 21 shots. He gave up a poor rebound on Kobasew’s first period tally and Adams goal from the slot from a soft one to give up.
The Penguins played with 11 forwards in the game for the most part as James Neal played just 3:49 and left during the first period and did not return. Neal has been dealing with an upper body injury but looked to come down on his left leg when he appeared to get injured tonight. Bylsma, though, claimed afterwards Neal is dealing with the same injury from earlier in the week.
5 TAKEAWAY’S FROM PENGUINS – DEVILS
(1) While Marc Andre Fleury recording a shutout will get all the headlines and the shutout is big for him, the real story for the Penguins tonight was an improved defensive system and assistant coach Jacques Martin had his hand on this. The Penguins were very strong in isolating around Fleury, especially in the first two periods, and the Penguins constantly collapsed to the middle keeping shots to the outside. The Devils outshot the Penguins 27 to 21 but the Penguins gave up few prime scoring chances and got bodies in front of pucks with 23 blocked shots. Against a Devils team that is not a skilled team, the Penguins defensive system worked to a “T” tonight. Penguins head coach Dan Bylsma said afterwards he believes the Penguins kept the Devils under 12 scoring chances.
(2) The knock on Tanner Glass has been him not playing with any kind of edge and just going through the motions. Tonight he played with an edge and was a constant physical presence. Probably his best game as a Penguin. Glass also made some things happen offensively, picking up an assist on Craig Adams third period goal by blocking a shot in the slot and pushing the play the other way as he made a great center drive on a 3-on-2 rush with Malkin and Adams, as Malkin found Adams open in the slot for the goal. Glass in 9:38 of ice time, had an assist, +1 rating, 3 blocked shots, 4 hits, and 7 PIM.
(3) For the past week I’ve heard, the coaching staff feels Chuck Kobasew is a better fit than Matt D’Agostini on the third line. Obviously D’Agostini didn’t play tonight, but we saw Kobasew do a lot of good things and he brings speed to the outside and gets to the right areas. In talking with people who follow the Avalanche, Kobasew seems to have adapted his game the right way in evolving into a bottom-6 player over the last two years after being a top-6 guy earlier in his career with Boston.
(4) The Penguins were credited with 23 blocked shots and product of that was collapsing to the middle and keeping the Devils to the outside. Tonight’s Blocked Shot Leaders: Matt Niskanen (5), Brooks Orpik (4), Olli Maatta (3), Tanner Glass (3).
(5) Olli Maatta had some 19 year old moments out there especially with the puck but I thought he played pretty sound defensively and used his stick very well as he has a long reach and wingspan. Maatta logged 14:44 of ice time and was credited with 3 blocked shots and 1 hit.
BY THE NUMBERS
The Penguins were outshot 21-9 over the last two periods……Pittsburgh was 0-1 on the power play and 2-2 on the PK……..Sidney Crosby was 15-7 (68.2%) in the faceoff circle……….Matt Niskanen played 19:51, had an assist, +2 rating and a team-high 5 blocked shots…….Paul Martin logged a team-high 24:26 of ice time and had 3 takeaways…..Chris Kunitz was credited with a team-high 7 hits in 18:52 of ice time…..