Addition of McKee gives Penguins a strong mix on their blueline 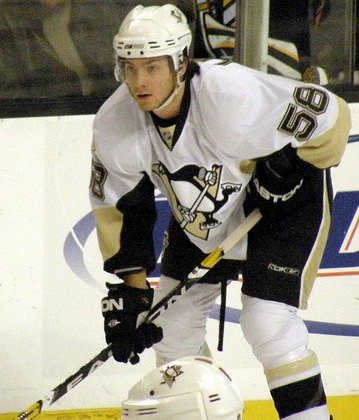 The signing of veteran defenseman Jay McKee to a one year deal rounds out the Penguins top 6, following the losses of Hal Gill and Rob Scuderi to free agency.
McKee a shot blocker who prides himself on clearing the front of the net, toughness, will be a perfect compliment to young defenseman Alex Goligoski, who still has a ways to go when it comes to his play in the defensive zone.
The subtractions of Hal Gill and Rob Scuderi and the additions of Goligoski, McKee, give the Penguins a strong mix on their blueline.
Penguins general manager Ray Shero is a believer in having three puck moving defensemen in his lineup and the Penguins will have that for the upcoming season in Sergei Gonchar, Kris Letang and Alex Goligoski.
Gonchar at age 35, still has some good hockey left in him, scoring 19 points in 25 regular season games and is among the most under-rated defenseman in the game.
As with any young defenseman, Kris Letang still has consistency problems but the sky is the limit for the talented blueliner and he appears to be on the verge of breaking out offensively and posting a 45-50 point season.
Alex Goligoski is regarded by some scouts as being the best puck moving defenseman on the team. Offensively he doesn’t look out of place. Defensively that is a different story as he struggles clearing the front of the net,
winning battles in the corners against `bigger stronger players.
McKee who is regarded as a great character guy, could be a pivotal player in Goligoski’s development and will provide a security blanket for Goligoski on the ice as the two will likely begin training camp as a pairing.
With a full training camp to implement his system, head coach Dan Bylsma expects the Penguins to play even more aggressive on the offensive attack and it starts with their defensemen moving the puck up to their forwards through the neutral zone.
They have the personnel in place to get significant contributions from their backend, which the Penguins believe will make up for any deficiencies on their wings.
If healthy, Gonchar, Goligoski and Letang alone have the potential to combine for 160+ points.
One of the top beneficiaries of playing in Dan Bylsma’s system was Mark Eaton who played in a similar system in Nashville.
Eaton is not regarded as an offensive defenseman by no means but the kind of system the Penguins are now running will continue to benefit him greatly next season.
Hal Gill was not a good fit in regards to the kind of the system the Penguins want to run.
Now, Pittsburgh has the personnel in place that suits their system and they have a good mix of players who complement each other very well.
Current Depth Chart
Orpik – Gonchar
Eaton – Letang
McKee – Goligoski