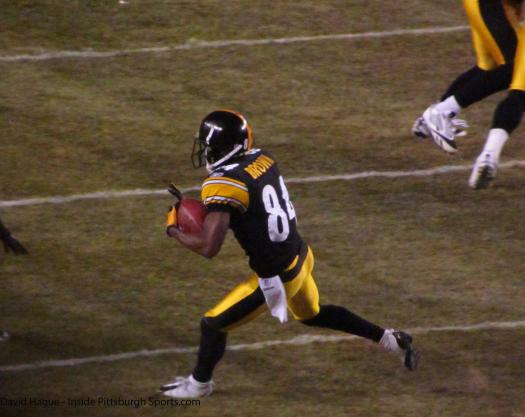 Pre-Game Buzz: What to Watch For

5:05 p.m. – Steelers inactives
Cornerback Bryant McFadden is active for the Steelers. Special teamer Will Allen was optimistic of playing but is inactive. No other surprises among the group….. Here are the Steelers inactives…
Aaron Smith, Will Allen, Jonathan Dwyer, Tony Hills, Chris Scott, Crezdon Butler, Charlie Batch (3rd QB).
From Earlier —
A few pre-game notes as kickoff is about four hours away—
1. Bryant McFadden: On the injury front, all eyes are going to be on starting left cornerback Bryant McFadden. The sense is McFadden will be active but there are a lot of doubts that he will be able to get through the game. He wasn’t able to practice fully this week and is not even close to 100 percent.
If McFadden is not active or unable to play much, William Gay will start and Anthony Madison will move into the nickle. – Advantage Jets.
2. Revis Matchup: WR Mike Wallace had 7 catches for 102 yards (14.6 average) vs. Jets in Week 15, as the Jets matched Antonio Cromartie against Wallace in week 15.
There’s been a lot of talk of whether Revis will get the “Wallace” matchup tonight. The Steelers believe a Wallace – Revis matchup is advantage Pittsburgh and the sense is Revis will be matched up against Ward again and will end shadow Emmanuel Sanders in three receiver sets.
3. Special Teams: A lot of focus for the Steelers this has been on suring up their coverage units as the Jets burned them in that area in week 15. The Steelers have regressed in the kick return game of late.
As for personnel, the team figures to get a boost on their coverage units from linebacker Jason Worilds (recovering from knee injury) who ran with the 1st team all week and is expected to be active. However, If McFadden is inactive, it will lead to the Steelers possibly being forced to dress Crezdon Butler and sit down a special teamer.
4. Jets to spread Steelers out?: The vibe out of the Steelers locker room is that they don’t believe Mark Sanchez can beat them and they want to make the Jets one dimensional.
The expectation is that the Jets will look to establish the run which is how they’re built offensively but don’t be surprised if they come and try to spread the Steelers out.
Offensive coordinator Brian Schottenheimer hinted this week at the possibility when talking about how to beat the Steelers defense.
5. One of the key matchups tonight will be Jets LT D’Brickashaw Ferguson vs. Pittsburgh ROLB James Harrison. The Steelers had just one sack against the Jets in week 15.
Harrison is coming off a three sack performance and dominant game against Baltimore’s Michael Oher.
6. Miller/Polamalu Factor: Two big differences from the week 15 matchup will be the presence of Heath Miller on the offensive side of the ball and Troy Polamalu on defense. Those two in the game changes the whole dynamic tonight..
Miller has 24 receptions for 280 yards and 3 touchdowns in his past 5 playoff games.
7. Will Holmes burn the Steelers? A nightmare situation for the Steelers will be Santonio Holmes burning the Steelers and leading the Jets to the Super Bowl with a big play down the stretch.
When Pittsburgh scrambled and traded Holmes for just a 5th round pick last April after they received word that he was going to be suspended, the Steelers knew the Jets were going to be a contender and the possibility could arise where he came back to haunt them.
With Pittsburgh and now the Jets, Holmes has been one of the top post-season game changers.
Holmes who was the Super Bowl XLIII MVP with Pittsburgh (9 receptions-131 yards with game winning TD), has won five consecutive post-season games.