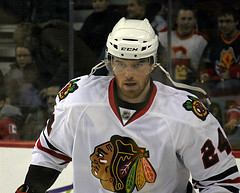 The NHLPA held it’s annual meetings this morning in Las Vegas.
It is being speculated that the NHLPA has decided to exercise their 5% inflator on the salary cap, which will keep the cap around the level it was this season.
Another hot topic between the players association, are the Phoenix Coyotes. The growing concensus is that the players believe relocating to a market where the franchise won’t be in the red year after year is the best option.
A few Friday afternoon rumors
Marian Hossa is currently on vacation and will return sometime next week.
Ritch Winter the agent for Hossa has been in talks with Wings GM Ken Holland and word is Hossa will make a decision on whether to test free agency by draft day.
Martin Havlat has made concessions in talks with the Hawks and the only hold up on a deal is the term of the contract. It could be a deal breaker but signs point towards Havlat being locked up before July 1.
Phil Kessel has declined a four year offer worth $15 million. If Jordan Staal is worth $4 million per season, Kessel is worth at least $4.25 million per season.
Remains to be seen if Kessel will be actively shopped at the draft. To this point, he hasn’t been.
The Rangers won’t increase their offer of 3 years – $9 million to Nik Antropov
Last night it was widely believed that a deal for Penguins
defenseman (two years) Ben Lovejoy would be announced this afternoon.
Spoke to a team official early this afternoon and he told me the hold up remains the fact that Lovejoy wants a one way contract.
The term and the amount of salary has been agreed upon. The snag right now is the one way contract demand and Pittsburgh is not going to give in.
The organization has concerns about their backup goaltender situation. They will look for a veteran goaltender to battle with John Curry.
Marc Andre Fleury has not shown the ability to stay healthy for the past two seasons.