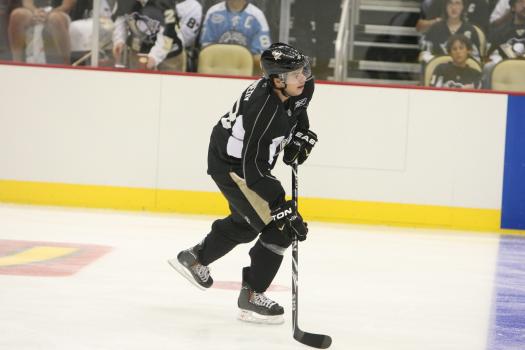 Is Penguins GM Ray Shero done on the extension front until after the trade deadline?
Shero has locked up defenseman Deryk Engelland and forward Mark Letestu to extensions this month but the Penguins have yet to have “any” discussions with the agent for one of their key role players who could get too expensive for the Penguins via restricted free agency.
A Look at Kennedy’s Status
The Penguins have around $52.325 million committed to 15 players (6 forwards, 7 defensemen, 2 goaltenders) for next season.
Although the cap is projected to rise from $59.4 million to the $61-to-$62 million range, that already puts Shero in a tough spot having under $10 million to spend on at least 7 roster spots.
One player whose in an interesting situation is 24 year old winger Tyler Kennedy. Kennedy is a restricted free agent at seasons end and is arbitration eligible.
Kennedy is a player the Penguins really like and there has been some chatter around the team that Kennedy would be the next target.
However, I spoke with sources this afternoon who told me that “no discussions” have taken place between the Penguins and Kennedy’s camp at this point and none are planned as of now.
One thing to keep in mind is that the Penguins reached out to Engelland’s and Letestu’s camp about a month before officially begining talks to express interest in getting something done.
In regards to Kennedy and others like Max Talbot {no talks have taken place on that front too}, things could always change but the sense is from Kennedy’s camp is that they would have heard from the Penguins by now if that had an interest in getting something done before the end of the regular season.
One reason Kennedy’s situation is intriguing is that he’s arbitration eligible. He’s currently making $850,000 with a cap hit of $725,000.
For a lot of heat he takes from fans, at least it seems that way, he’s very good value as a top-9 forward on a cap-strapped team and again is only 24 years old.
In his 4th NHL season, Kennedy has 7 goals and 15 assists on the season and is on pace for a career high 38 point season and +10 rating. He is a +33 in his career.
Being a restricted free agent, Kennedy will be in line to receive a qualifying offer of 105% of his prior year’s salary ($850,000).
Assuming he finishes the season at his current pace, Kennedy would surely receive a qualifying offer from the Penguins due to his cap hit being under $1 million per season, (if a deal wasn’t worked out before hand) but if he were to opt for arbitration, things could get tricky and eventually lead to Kennedy becoming too expensive for the Penguins.
Two prime examples last off-season of why Kennedy’s value in an arbitration case could result in a contract over $1.5 million per season are the arbitration rulings of Tim Kennedy and Clark MacArthur.
Buffalo’s Tim Kennedy was awarded a one-year $1 million contract in arbitration. He was coming off his rookie season in which he made only made $635,000 and finished with 10 goals and 16 assists in 78 games playing mostly on the third line.
The Sabres walked away from the ruling and Kennedy is now in the New York Rangers farm system.
Atlanta’s Clark MacArthur, a third liner at the time, was awarded a one year $2.4 million contract, coming off a 16 goal – 35 point season. At the time it was an outrageous ruling, although MacArthur has ended up becoming a steal for the Maple Leafs this season at a much lower salary.