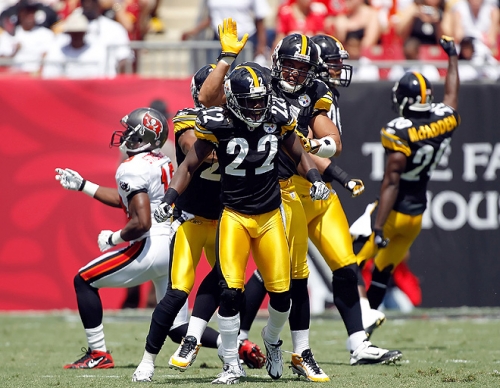 Recap: The Pittsburgh Steelers improved to 3-0 on the season, dismantling the Tampa Bay Buccaneers 38-13 on Sunday afternoon at Raymond James Stadium. Pittsburgh had 395 yards of offense with quarterback Charlie Batch (12-17, 186 yards, 3TD 2INT) throwing 3 1st half touchdowns.
The Steelers rushing attack was also in top gear, running back Rashard Mendenhall rushed for 143 yards and 1 touchdown in the win. The Steelers had a total of 209 rushing yards, averaging 6.5 yards per carry.
In the air, Batch connected with Mike Wallace for touchdown strikes of 46 and 41 yards. Wallace led all pass catchers with 3 receptions for 100 yards.
The Steelers defense was dominant once again, forcing two turnovers (league high-10), including a Brett Keisel 79 yd interception return for touchdown. The team also had 4 sacks.
Pittsburgh (3-0) host Baltimore (2-1) next Sunday in an AFC North showdown.
Post-Game Observations
———————————————————

The Pittsburgh Steelers continued their dominance on defense in Sunday’s 38-13 win but it was their offense that led the way behind quarterback Charlie Batch (106.5 QB rating) who threw for 3 touchdowns and 177 yards in the first half as Pittsburgh jumped out to a 28-6 lead at the half.
Batch was accurate, poised and decisive, finishing the game 12 of 17 for 186 yards, 3 touchdowns and 2 interceptions.
Batch threw an interception on his first pass of the game but for the rest of the game imitated Ben Roethlisberger at times.

Most impressive about Batch’s performance was his composure in the pocket. He avoided the rush extremely well, stepped up and made big throws.
With Batch at the helm it was clear from the start of the game that offensive coordinator Bruce Arians was more comfortable to open things up in the passing game.
Batch was attacking the Buccaneers defense down the field early which resulted in a 46 yard touchdown pass to Mike Wallace, giving the Steelers a 7-3 lead in the first quarter.
A drive for the Steelers that standsout was their 1st drive of the second quarter after a Connor Barth 34 yard field goal that cut the Steelers lead to 7-6.
Pittsburgh responded, going 6 plays for 67 yards with Rashard Mendenhall scoring a 3 yard touchdown run on 1st and goal. The key play on the drive was a Charlie Batch 24 yard run on 3rd and 6 to move the chains and push the Steelers into Buccaneers territory.
As Batch was tremendous to avoid the rush, his ability to make plays off of his 3rd or 4th read led to big plays and Hines Ward’s 9 yard touchdown catch with 16 seconds remaining in the 2nd quarter. That’s what you get with a veteran quarterback who in the first half was in the zone.

When the Steelers wanted to pass they could and when they wanted to run they also could. The Steelers offensive line dominated Tampa Bay in the trenches.
Rashard Mendenhall (143 yards – 1TD – 7.5 AVG) was phenomenal showing great vision and bouncing off long runs. Mendenhall had several nice runs, especially to the right side.
Mendenhall’s ability to get those tough 3 or 4 yards is a developing area of his game and he stood out in that area today. In the 4th quarter looking to grind down the clock when everyone knew the Steelers were going to run, Mendenhall, Steelers were able to move the chains consistently and wear down Tampa Bay.
At times the Steelers used Mendenhall and short-yardage back Issac Redman in the backfield. It’s a formation the Steelers will likely continue to use as Redman has improved his blocking skills, most notably his ability to pick up incoming linebackers.
Redman rushed for 31 yards on just 5 carries.

The Pittsburgh Steelers are off to a surprising 3-0 start without Ben Roethlisberger and they are winning games due to a total team effort and are finding ways to get it done in all areas. In week 1, defense and a big play in overtime from Rashard Mendenhall prevailed the Steelers over Atlanta.
In week 2, defense and special teams off-setted a meager offensive output to dominate the Titans 19-11.
Against Tampa Bay this afternoon, it was the offense that got it done, scoring 31 total points, including 28 1st half points. Without Ben Roethlisberger, this is a group that appears to be very close and are playing with a chip on their shoulder, especially on the defensive side of the ball.

Pulling out wins against Atlanta (2-1) and Tennessee (2-1) were impressive in itself without Ben Roethlisberger and the wins are even looking better when it comes to evaluating the Steelers defense.
Atlanta and Tennessee each improved to 2-1 on the season this afternoon, earning victories against New Orleans and the New York Giants respectively.
Atlanta pulled out a 27-24 overtime win on the road against the defending Super Bowl champs and Tennessee earned a 29-10 road win against New York.
After putting up just 9 points against Pittsburgh, Matt Ryan and the Falcons have put up 68 points in their past two games.

**With the Steelers leading 7-3 late in the 2nd quarter, cornerback Ike Taylor dropped a fairly easy interception with no one around him that kept the drive alive for Tampa Bay as they marched down the field. For Taylor’s sake, the drop resulted in only a field goal as the Steelers buckled down defensively stopping Tampa’s offense near the goal line on three downs.
However, it’s a play that has to be made by Taylor and in a close game could have came back to hurt the Steelers.
**The Steelers continue to get great play from their backups. On the defensive side of the ball, Chris Hoke and Nick Eason have been very under-rated performers on the defensive line.
Eason who had one of the Steelers four sacks, has outperformed 2009 1st round pick Ziggy Hood by a wide margin through three games.
Meanwhile, Hoke has filled in admirably for Casey Hampton who I don’t see having a great impact this season. Hoke though suffered a knee sprain near the end of today’s game and will be out for at least 1-to-2 weeks. Losing Hoke will be a tough blow to the Steelers, especially if the injury lingers. The Steelers have a bye in week 5.
Speaking of backups, look for Larry Foote to push James Farrior hard for playing time by mid-season.
*Doug Legursky started in place of the injured Trai Essex today at right guard. Legursky and Ramon Foster alternated at the position and Foster did some nice things on a few key running plays to the right side when he was in there. The staff has been leaning towards Legursky of late but I still see Foster as the better option.