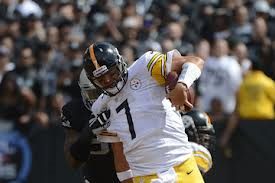 BEN TRADE RUMORS SURFACE
While no one really wants to admit it, the Steelers are likely in a 2-3 year rebuild before they can truly re-emerge again into a top contender in the AFC. Maybe they don’t even get back that quick, no guarantees, but this team isn’t just a few moves away from being back. With so many holes to fill, it was only a matter of time before the Ben Roethlisberger trade speculation surfaced. Ian Rapoport of the NFL Network had the football world buzzing today, reporting that “team sources expect Roethlisberger to ask the Steelers to explore a possible trade in the offseason,” Rapoport was told.
Rapoport is taking a lot of heat for the report as the agent, Steelers and Ben Roethlisberger have, as expected, came out and denied it. Really, though, what did people expect them to say — “Yeah Ben’s not happy and would like a trade?”
Here’s what Ben had to say about the matter.
“When it comes to wanting to go somewhere else or or anything like that, that’s completely unacceptable,” Roehtlisberger said. “It’s one of the most BS stories I’ve ever heard of. I’ve always said I want to be a Steeler for life, I love it here, I’m happy here and I don’t want to go anywhere.”
I think Ben is sincere in that wants to be a Steeler for life as he is comfortable here, but I’ve felt for weeks that Ben getting traded this off-season isn’t that far-fetched and it’s not, though, I’d put the percentages at only around 20% at this point.
Ben continues put on a good face that he is happy but why would he be?
Why a trade can’t be ruled out: The Steelers have at least a 2-3 year rebuild, Ben will be 32 next season and wants another $100 million contract, which is the going rate out there.
The worst kept secret in football is that the Rooney’s are not too keen on dishing out another massive contract to Roethlisberger who at this stage in his career is showing that he’s just not the caliber of quarterback who can carry a mediocre team to the playoffs. That’s really the truth and it’s one reason that it would be tempting for the Steelers to at least consider trading Roethlisberger for multiple high draft picks that could accelerate the rebuild, assuming the Steelers get a franchise QB in the draft.
The chances are slim, though, that Roethlisberger is moved, unless he were to really push for it behind the scenes based on the direction of the franchise and the two sides were to be far apart on a new extension.
What I envision happening is the Steelers believing they are just a player or two away from contending and give little thought to moving Ben. It could end up being the wrong move in the long run.