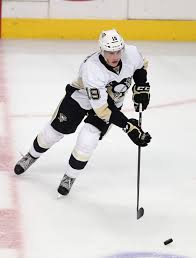 From a skill standpoint Beau Bennett screams top-6 forward. Everyone got a glimpse of that Friday night when Bennett was the best player on the ice in the Penguins 2-1 win over the Columbus Blue Jackets.
“I was really impressed with Beau’s game,” Bylsma said Sunday of Bennett’s performance vs CBJ. “How well he skated, how strong he was on pucks. Skill was evident…. but he attacked, attacked with speed, looked to get his shot off through traffic sometimes, made some great plays. He was physical, second on our team in hits as a forward. Went to the hard areas, was hard on the wall. He was really good.”
Expecting him to play at that level consistently might be a bit unrealistic, but even though he’s only played 39 career regular season games, you don’t waste players with Bennett’s skill set playing a third line role with mediocre offensive players like Brandon Sutter.