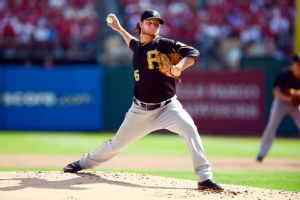 Cardinals rookie Michael Wacha took a no hitter into the eighth inning and St. Louis Cardinals avoided elimination, beating the Pittsburgh Pirates 2-1 Monday in Game 4 to set up a winner-take-all Game 5 Wednesday evening back in St. Louis.
The series is tied, 2-2.
Wacha went 7 1/3 innings, allowing 1 hit and 1 run in a dominant outing as the Cardinals improved to 7-1 in elimination games since 2011.
Pedro Alvarez broke up the no hitter with a solo home run in the eighth to cut the Cardinals lead to 2-1 but the Pirates comeback came up short. The home run estimated at 438 feet was Alvarez’s third home run of the series. The Pirates third baseman was the only bright spot at the plate today..
Charlie Morton was efficient allowing 3 hits over 5 2/3 innings but Matt Holliday’s two-run homer Morton in the sixth was the difference in the game.
As both teams turn to Game 5, much debate has been on who the Pirates start in Game 5. Manager Clint Hurdle making the right move, announced after today’s loss that Gerrit Cole will get the start as the Pirates will by-pass A.J. Burnett in the rotation.
The Cardinals will send ace Adam Wainwright to the mound in Game 5.