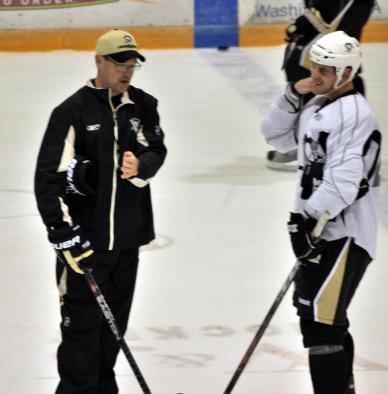 Professional sports is a what have you done for me lately business and Penguins forward Maxime Talbot is finding that out.
Talbot, the Penguins game 7 Stanley Cup hero has struggled mightily since returning from off-season shoulder surgery and has found himself in the press box frequently over the past three weeks.
Talbot was a healthy scratch once again for the Penguins Tuesday night as the coaching staff opted to play enforcer Eric Godard.
In the past, Talbot has filled the 4th center role admirably but that’s not the case this season as the coaching staff values Craig Adams over Talbot in that role.
Head coach Dan Bylsma has a lot of trust in Adams and likes the presence of a right handed centerman I’m told, which has put Talbot in the press box when the staff decides to dress Eric Godard.
While Adams has the support of the coaching staff, he is not having a good season. In fact, lately, he has looked like a player who was placed on waivers last season.
Playing a 4th line role, Adams has not been strong in the defensive zone. He has the second worst plus/minus rating on the team with a minus-5 and is a combined minus-5 in his last 7 games.
Tonight the 4th line of Michael Rupp, Craig Adams and Eric Godard caused the Thrashers first goal of the game as Adams – Godard and Rupp all went to the puck carrier on the left boards at the top of the Thrashers blue line as Chris Thorburn found Jim Slater in the neutral zone for a breakaway goal.
Meanwhile, where Adams has not been consistent all season is in the face-off circle. Of the Penguins top four centers, Adams ranks third with a 43.4% on draws.
Max Talbot has not done much this season to warrant consistent playing time, but Adams should not get a free pass when it comes to candidates to sit. So far he has…..
Talbot has been a valuable role player for the Penguins over the course of the past three seasons. He has not been a good fit at wing this season and giving him an extended look at center should be considered.