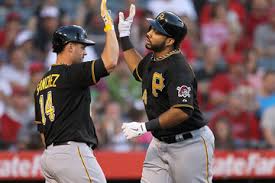 *Gerrit Cole (5-3, 3.51 ERA) pitched seven strong innings and went 2-3 at the plate with an RBI single as the Pittsburgh Pirates (59-39) beat the Washington Nationals (48-52) 5-1 on Tuesday night to extend their winning streak to three games.
With the way Cole is hitting, David Littlefield would be preparing to move Cole to first base if he was still the Pirates GM.
Cole allowed 2 hits and 1 run, striking out 4 and walking 1. He ended a personal three game losing streak. After allowing a home run to Nationals catcher Wilson Ramos in the third inning, Cole retired 15 of the last 16 batters he faced.

*Bryan Morris (2.53 ERA) pitched a scoreless eighth inning, allowing 1 hit. Morris struck out one and threw 12 of 16 pitches for strikes. In a 5-1 game, Hurdle let Mark Melancon (0.95 ERA) pitch in the ninth. Melancon only needed 7 pitches to get three outs and end the game.

JuJu to return vs Chiefs