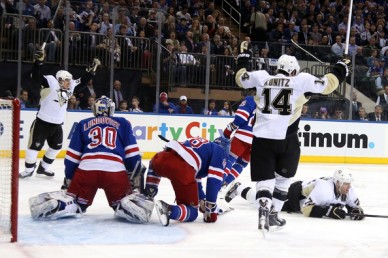 ON PENGUINS TAKING 3-1 SERIES LEAD
Oh how quickly the narrative has changed for the Penguins. Just a few weeks ago the Penguins were looked at as a vulnerable contender in the Eastern Conference and their up and down first round series vs Columbus didn’t exactly change that.
Four games into Round 2 and this team suddenly looks like they have what it takes.
The Penguins have taken a 3-1 series lead over the New York Rangers with a 4-2 win Wednesday night and the story of the second round for the Penguins continues to be their commitment to team defense from their forwards to their defensemen.
It was on display again Wednesday night as the Penguins limited a Rangers team pretty much in a must-win situation to just 15 shots in the game and 4 shots in the third period when New York trailed 2-1 going into the period.
Aside from a few breakdowns in the second period, notably the Carl Hagelin goal when Matt Niskanen made a bad read, Pittsburgh again held strong at their blueline and forced the Rangers to play a dump and chase game, something that is not a strength for New York.
Again in Game 4, the Penguins defended the Rangers cycle very well, big improvement since Game 1, and that’s where the commitment from the Penguins forwards to team defense has been strikingly better than in the regular season or even in Round 1.
Things can always change so quickly in the playoffs, but everything is going the Penguins way right now from avoiding Detroit and Philadelphia in the first two rounds to some of the lucky bounces they are getting this round. You need luck in the playoffs and the Penguins are getting it right now.
The Rangers look finished as their power play is dreadful and they continue to get nothing from the likes of Marty St. Louis, Rick Nash, Brad Richards, Ryan McDonagh, Derek Stepan and Marc Staal.
It’s possible this round has just been a perfect matchup for Pittsburgh and the Penguins are setting their fans up for another big let down next round against Boston or Montreal, but right now this team looks like a much different team than a few weeks ago.
THREE DEVELOPMENTS FOR THE PENGUINS THIS ROUND
1. Team Defense – It has really started with the commitment from the forwards the last three games in defending the neutral zone and slot better.
2. Evgeni Malkin – The last time Malkin was playing at this level in the playoffs it was 2009 during the Penguins Cup run. Malkin’s night in Game 4: Goal, Assist, +2, 13 shot attempts. Malkin looks like a natural at right wing.
3. Puck Possession Game – One huge difference for the Penguins this post-season than in the regular season? They have been a dominant puck possession team this post-season. It hasn’t just been the Kunitz – Crosby – Malkin line. Jokinen – Sutter – Neal have been creating sustained offensive zone time along with Bennett and Stempniak on the third line. Extra Skater.com has the Penguins as the best puck possession team in the playoffs right now at 57.8%.