Crosby talks about his light skate this morning and recovery 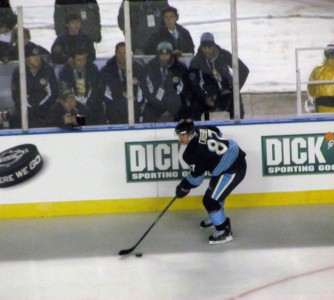 Crosby media session notes
— Sidney Crosby has taken the first couple steps to “possibly” returning this season from post-concussion symptoms that have sidelined him for over two months.
After being unable to shake off lingering symptoms such as random headaches, Crosby has been symptom free for a “few days” now, the Penguins captain just said during a media session.
Crosby who reportedly went through a light skate for approximately 15 minutes, said that he feels okay now but symptoms usually come on later if he gets them.
This is a positive development for Crosby and very good news but whether he returns this season is going to be a wait and see approach. Everything is going to be day-to-day with him.
More Tidbits
— As expected, Crosby would not speculate on when he will return. He said that he’s not even close conditioning wise. With improvement over the past week, the best case scenario appears to be 4-5 weeks, if no more issues arise.
From the Penguins standpoint, It sounds like mid-April is the “hope” at this point, which would peg a return for the playoffs.
A normal rehab scenario for a player recovering from a concussion is around 2 weeks-3 weeks but Crosby’s situation isn’t normal as he’s been sidelined about 2.5 months.
This is a situation where the Penguins and Crosby will be very careful. Once he gets healthy, how he responds to a hit will be the biggest obstacle to overcome.
A lot of things to take into account with concussions being the “unknown”.
What I will say —- is that despite there being doubts for weeks now from Crosby’s camp and some in the Penguins organization about him returning this season, the Penguins could have easily kept it quiet that Crosby was on the ice this morning as he skated hours before the media arrived. Read what you want into that.
— In regards to reports about retiring, Crosby said he never considered retirement or ending his season.
— With the NHL GM meetings this week, Crosby wants headshots banned if deemed intentional, but says he’s not sure how to handle headshots that were done by accident.
— Crosby has spoken to a lot of players about concussions and said today that he spoke with former Penguin Jordan Leopold last week, when Buffalo was in town.
— Information provided by Will DePaoli and Tim Benz–