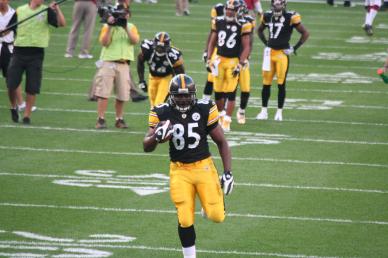 Steelers may have their most talented team this decade
With the season opener on Thursday, Sept. 10, the Pittsburgh Steelers informed 22 players on Friday that they will be placed on waivers this weekend.
The Steelers had some difficult decisions to make which shows how talented and deep this team is.
From 2009 first round pick Ziggy Hood to 2009 7th round pick David Johnson, a number of rookies and 2nd year players, could play a key role for the Steelers this season.
Eight rookies have made the team, including 7 draft picks.
Johnson will be the Steelers #3 tight end as the team will place TE Sean McHugh on injured reserve this week. Johnson will have a role on special teams and gets reps as a blocking back in certain running situations.
Among the key veterans that were cut; FB Carey Davis, CB Anthony Madison and 2nd year player Donovan Woods who appeared in 5 games last year.
Others? The following 18 players that were cut are
QB Mike Reilly, RB Isaac Redman, RB Justin Vincent, WR Dallas Baker, Brandon Williams, Tyler Grisham, TE Dezmond Sherrod, OL A.Q. Shipley, Jason Capizzi, Jeremy Parquet, DL Steve McLendon, Scott Paxson, Ra’Shon Harris, LB Tom Korte, Andy Schantz, Bruce Davis, CB Roy Lewis, K Pitor Czech.
Bubble players Ryan Mundy, Frank Summers, and Arnold Harrison have been informed that they have made the team.