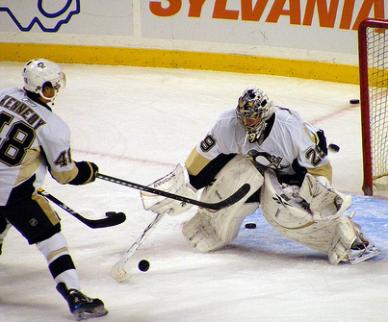 Pens snap losing streak
Summary: Marc Andre Fleury gave up less than 3 goals for the first time this season but the Penguins starting goaltender didn’t even make it to the seven minute mark of the first period.
After giving up 2 first period goals on five shots, and with Pittsburgh trailing 2-0 just minutes into the first, head coach Dan Bylsma pulled Fleury from the game at the 6:56 mark of the first period.
“I thought at that point the best thing for our team was to switch it up, ” Bylsma said. Bylsma went to Brent Johnson who has been spectacular at times this season and has the carried the Penguins for much of the season.
The goalie change sparked the team and Johnson made several key saves and Pittsburgh rallied with big second period with goals by Sidney Crosby and Evgeni Malkin to tie the game at 2-2.
Trailing 3-2 late in the second, Chris Kunitz scored a power play goal with 34 seconds remaining in the period to tie the game at 3-3.
After a scoreless third period and overtime, Mark Letestu won the game in the shootout, beating Ilya Bryzgalov for the win.
Letestu who assisted on Kunitz’s second period goal, snapping a seven game pointless streak, had a strong game and was picked as the Penguins third shooter. Sidney Crosby and Kris Letang, the first two shooters, were stopped in the shootout.
Brent Johnson became the goalie of record and made 22 saves on 23 shots to earn his 6th win of the season. Johnson turned aside all three Coyotes shooters in the shootout.
Pittsburgh improved to 7-7-1 on the season and had previously lost 5 of 6 games coming into the game.
It was a big win for the Penguins as they return home Wednesday night against the Boston Bruins.
Post-Game Observations
*The Penguins goaltending situation took another twist Saturday night as Marc Andre Fleury was pulled just 6:56 into the game. Coming into the Penguins three goal Western Conference swing, Johnson was expected to start Wednesday and Saturday night but as we reported Friday morning, that wasn’t set in stone and Fleury’s performance Friday night would dictate who starts Saturday night.
Looking to snap a two game losing steak, Bylsma went back to Fleury and was looking for a big game from him. Things didn’t go as planned.
Fleury looked lost on Eric Belanger’s 1st period goal at the 2:35 mark and Radim Vrbata scored a fluky goal that went under Fleury’s pads minutes later. The goal was reviewed but was still another bad goal.
Bylsma had seen enough and pulled Fleury less than seven minutes in.
We are now a month into the season and this is becoming a serious concern. Just how bad are Fleury’s numbers: He is 1-6 on the season with a 3.54 GAA and .853 save percentage.
Johnson rebounds: Brent Johnson was specatular at times, making 22 saves in relief of Fleury. Unlike Wednesday night where he never looked comfortable between the pipes, Johnson was poised and gave the Penguins confidence that this game was far from over.
Johnson is now 6-1-1 on the season with a 1.62 GAA and .943 save percentage.
Crosby/Malkin Step Up: Sidney Crosby jumpstarted the Penguins rally and was dominate at times on the ice. He converted a Derek Morris turnover, just a 1:16 into the second period for his 10th goal of the season and that goal got the Penguins going.
Evgeni Malkin scored 3:02 later to tie the game at 2-2 and Pittsburgh had momentum. It was a big goal for Malkin, his 4th of the season. Malkin seemed energized after the goal and played his best game since Pittsburgh’s 4-3 OT win against Nashville last month.
Crosby had 2 points in the game to give him 19 points on the season. He is closing in on the league lead.
Letestu gets back on the score sheet: After scoring 7 points in his first seven games, Mark Letestu had his most complete game in several weeks Saturday night. He had the primary assist on Kunitz’ power play, snapping a seven game pointless streak, then scored the game winning goal in the shootout.
Engelland gets exposed: It has been no secret that head coach Dan Bylsma has been a fan of Deryk Engelland being paired with Brooks Orpik. The problem with that pairing is that eventually Engelland was going to get exposed getting top-4 minutes.
Despite a good start to the season, Engelland is still a number 6 or 7 defenseman at best.
Engelland had terrible gap control on Belanger’s goal as the Penguins were caught with two defenders in the direction of the puck carrier Wojtek Wolski who found a wide open Belganger breaking to the net and on the Coyotes second goal, Engelland was beat wide by Vrbata who was tripped and slide the puck under Fleury’s pads.
Engelland was benched for the rest of the first period and most of the game. He only had 6:23 of ice time.
Notes: Paul Martin assisted on Evgeni Malkin’s second period tally, his first point in eight games….Winger Chris Kunitz appeared in his 400th career game….