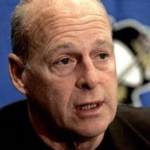 Former Penguins GM Craig Patrick, the architect of two Penguin Stanley Cups in the 1990’s, is finally back in the NHL, after being fired by the Penguins in April 2006.
Patrick is joining the Columbus Blue Jackets to serve as a senior advisor in the hockey operations department, Jackets GM Scott Howson announced today.
Patrick has been trying to get back in the NHL for several years and has only interviewed for one General Manager job since being fired over five years ago. He has not been a hot GM candidate by any means over the past several years.
However, Patrick’s presence in the Blue Jackets organization will surely put pressure on Howson who’s long-term future with the team is up in the air.
The Jackets have the worst record in the NHL with 19 points.