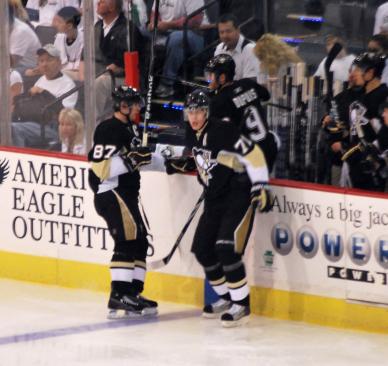 – Sidney Crosby’s individual play Friday night is getting all the press but it was Pittsburgh’s team defense in game 2 that is the most important aspect to take out of Friday’s win.
Playing with 5 defensemen for most of the game, Pittsburgh buckled down defensively, limiting the Senators to 20 shots on goal. After poor gap control by Sergei Gonchar on Peter Regin’s 1st period goal just 18 seconds into the game, Pittsburgh played shutdown defense for the final 59:42 of the game.
Pittsburgh kept the Senators to the perimeter and Marc Andre Fleury was rarely tested. Although a bounce in the third period could have put Pittsburgh in an 0-2 hole, the Penguins controlled the game defensively and the Senators never appeared to be a serious threat offensively.
–In the salary cap era, it is not easy to replace top-6 forwards and the loss of wingers Alexei Kovalev and Milan Michalek has hurt the Senators depth significantly on their top-2 lines.
The Senators are in solid position heading home after a split but the chances of getting the kind of game 1 production that the Senators got from their third line Wednesday night is not going to happen on a nightly basis.
Sidney Crosby and Evgeni Malkin have combined for 3 goals and 5 assists through 2 games, while Daniel Alfredsson and Jason Spezza have combined for 4 assists.
With a depleted group of wingers due to injuries, Spezza and Alfredsson are going to be counted on to carry the Senators offensively.
Spezza was taking off of his game in game 2 after Brooks Orpik delivered an open ice hit and one Eastern Conference scout I spoke to this afternoon believes that Alfredsson is showing signs of an aging player.
Quick Hits
– Talk out of Ottawa is that the Senators may consider adding Jonathan Cheechoo to their roster for game 3. The former 50 goal scorer had just five goals in 61 games for the Senators this season and scored eight goals in 25 games with the Binghamton Senators.
– The injury to Jordan Leopold has opened up an opportunity for Jay McKee to get back into the lineup but he will be on a short leash. Lovejoy will be under consideration to play but Pittsburgh wants him to get in a full practice. McKee will get the nod for game 3.
– The Penguins third line of Matt Cooke – Jordan Staal and Tyler Kennedy are a combined minus-9 through two games. Kennedy I’m told is very close to losing his spot on the third line.
– A number of players were furious about the crowds mock cheer towards Marc Andre Fleury in game 2. Fleury is 1-1 with a 3.03 GAA and .870 save percentage through two games.
Fleury rebounded nicely in game 2 but he wasn’t tested to the point where we can legitmately say that his game 1 performance is behind him.
– As expected, Andy Sutton will not be suspended for his hit on Jordan Leopold.
– 19 year old defenseman Erik Karlsson had 23:35 of ice time in game 2. Scouts have raved about the Senators young d-man.